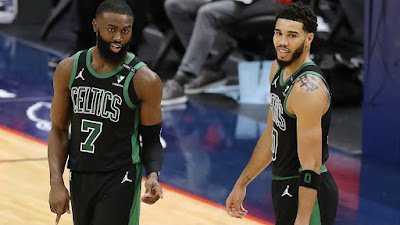 As Celtics coach Ime Udoka is looking forward to his first season in Boston, he's been making his media rounds as of late to talk about his roster before the upcoming 2021-22 season.
On a recent episode of ESPN's "Jalen & Jacoby," Idoka spoke about how he would like to see All-Stars Jayson Tatum and Jaylen Brown become better facilitators this year and create more opportunities for their teammates on offense.

"We have multiple handlers, multiple playmakers, and that's the area we need to see growth with Jaylen and Jayson," Udoka said. "It's not just scoring the basketball. It's those guys initiating offense and being better playing because that’s the next step in their evolution."

While Tatum and Brown each put up career numbers in assists during the 2020-21 campaign at 4.3 dimes per game and 3.4 respectively, Udoka is looking for the Celtics to return to more team play versus hero ball -- something that was not always the case this past season.
With Marcus Smart and the addition of Dennis Schroder doing more of the heavy lifting in terms of ballhandling, now that Kemba Walker is out of the equation, Tatum and Brown won't have to bring the ball up as often despite being the team's top-two scorers.
For the Celtics to play a more up-tempo, free flowing offense they'll need the two stars to trust their teammates when it comes to making that extra pass and avoid playing so much isolation ball.
Training camp opens up on September 28 and the Celtics first preseason game is scheduled for October 4 (vs Toronto), before the regular season tips-off October 20 against the New York Knicks at Madison Square Garden.
Joel Pavón
Follow @Joe1_CSP