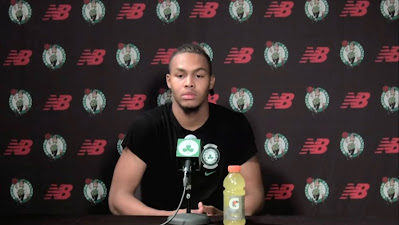 Juhann Begarin, the Celtics guard taken as the No. 45th overall pick in last month's NBA Draft, will get to display his skillset sooner than anyone expected.
Begarin has been added to the Celtics Summer League roster, as the 18-year old from France is in Boston already practicing for the team's first game come this Sunday against the Atlanta Hawks.
The 6-foot-5 prospect was prepared to stay overseas following the draft but, Begarin was insistent in asking the Celtics new president of basketball operations to play this summer.

Begarin is a late addition to the Summer League roster that is now up to 11, which also includes fellow prospect Yam Madar, who says he plans to play in the NBA this upcoming season. Two-way contract signee Sam Hauser, the undrafted forward out of Virginia will get a look as well from the C's brass.
Of course, you can't forget the familiar faces of Payton Pritchard, Aaron Nesmith, Carsen Edwards and Romeo Langford that hope to take advantage of the return of Summer League to help improve on their games.
While outside of being a potential draft-and-stash candidate for Stevens, not much is known about Begarin, except he's athletic, long and has a seven-foot wingspan that makes him play good defense -- something he enjoys doing.

"I like to push the ball and finish going to the basket," Begarin said of his game. "I like to steal the ball. And I need to improve on my shot and my passing game and my skills."

Begarin has played professionally for the past two seasons in France. He finished second on his team (Paris) in scoring with 11.7 points and in assists at 3.1 per game. Despite shooting 36.4% from 3-point range, he only hit 64.1% of his free throw attempts -- which he already knows to improve on.
It will be an adjustment to the NBA game for Begarin -- who turns 19 on Saturday -- as he takes the next step in his short professional career. But at least he has knowledge of some Celtics history, though.

"I know the players," Begarin said of the franchise. "I know the past, like it's one of the best teams all-time in the league. And they won 17 championships, I think. I know Brad Stevens."

Celtics Summer League will tip-off in Las Vegas, click here for a look at the roster.
Joel Pavón
Follow @Joe1_CSP