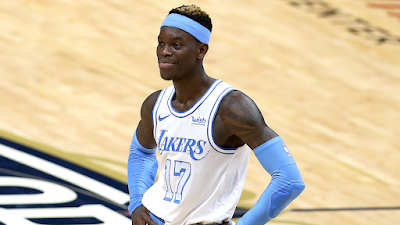 After a few days of reported negotiations between the Celtics and unrestricted free agent Dennis Schroder, it appears that president of basketball operations Brad Stevens has made an offer.
According to ESPN's Jordan Schultz, Boston has offered the 27-year old veteran guard a one-year, $5.9 million deal, which is the amount of the taxpayer mid-level exception -- specifically for teams currently paying luxury tax.
However, Schultz is also reporting that Schroder wants the full $9.5 million MLE -- normally for teams, not like the Celtics, that are not paying luxury tax -- including a second-year option as well. The C's don't want to be hard-capped, so they are standing firm on their original offer.

#Celtics have offered Dennis Schroder a one-year deal - at the taxpayer $5.9M MLE - per league sources. The current hold up for Schroder is twofold: He wants the full MLE - which is $9.5M - and also seeks a second-year player option. Boston doesn’t want to be hard-capped.

Schroder averaged 15.4 points, 3.5 rebounds and 5.8 assists last season for the Los Angeles Laker in 61 games played, which were all starts.
While not known a great 3-point shooter, averaging 33.7% from beyond the arc in his eight-year career, Schroder's speed and aggressiveness on both ends of the floor makes up for his lack of outside shooting. He would be another option at point guard with a different style of play, other than what the Celtics currently have on the roster in Marcus Smart and Payton Pritchard.
Still, Schroder would push the pace in the Celtics offense with more drives to he hoop, while providing solid defense on the other side of the ball.
Despite not always meshing with LeBron James and Anthony Davis in Lakers offense this past season, especially come playoff time where he shot 40% from the field and 30.8% from 3 in the first-round loss to the Phoenix Suns, Schroder turned down a reported four-year, $84 million contract extension back in March with the expectation of seeking a more lucrative offer in the price range of $100 million.
Now that the market has dropped considerably to the point that Schroder is in a "state of shock," per Boston Herald's Mark Murphy, "he needs time" to consider his lack of options at this point after his plan backfired.
For Schroder's sake, he shouldn't wait too long if he wants to revive his chances of possibly getting a long-term deal next offseason.
Lesson learned.
Joel Pavón
Follow @Joe1_CSP