Celtics legend Robert Parish details why he wore No. 00 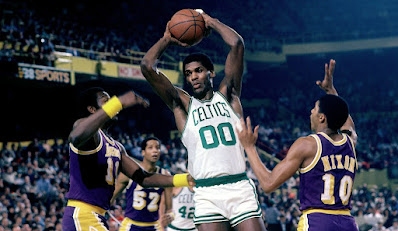 Legendary Celtics center Robert Parish, who turned 68 Monday, had one of the longest NBA careers at 21 seasons before being inducted into the 2003 Naismith Memorial Basketball Hall of Fame class.
The 7-foot-1 big man, who was nicknamed "Chief" courtesy of Celtic teammate Cedric Maxwell, won three championships in Boston throughout the 1980's and one more with Michael Jordan and 1996-97 Chicago Bulls -- calling it a career as a four-time champion.
While Parish's iconic No. 00 jersey has been retired into the TD Garden rafters since 1998, have you ever wondered how he came to use the most unlikeliest of jersey numbers?
The Hall of Fame center told the story one time of how he first ended up with the jersey number that would later become his signature throughout a near 30-year basketball career, which began in his native Shreveport, Louisiana.

"My junior high school team gave out jersey numbers to the players [based on] the scale of talent," Parish said on "In the Post with Elvin Hayes" Podcast.

Parish explained that the "best players got their jerseys first" when it came to the jersey selection process for the high school boys basketball team.

"And then, the players that weren't as good as the starting five, that's who got the remaining jerseys. And being that I was the worst player on the team at the time, 00 was the last jersey. So that's how I got the number 00."

"The number just stuck with me," Parish noted.

Needless to say the "worst player on the team" would carve out quite a career for himself until retiring from the game at age 43. Parish is not only one of the best centers but also considered as one of the 50 greatest players in NBA history.
Parish still holds the record for the most games played in league history at 1,611 and is also a top 30 scorer all-time at 23,334 points (28th).
As one-third of the original "Big-Three" in Boston with Larry Bird and Kevin McHale, Parish helped the Celtics reach the playoffs 13 times, win nine Atlantic Division titles, reach The Finals five times and raise three championships banners during his 14-year run in green.

"I will always be a Celtic at heart," Parish said via NBA.com. "That's where my career took off. It's hard for me to even believe how good we were. Some nights I'd be out there just kicking some guy's butt, really feeling it, and then '’d look over and see what Kevin was doing, and what Larry was doing, and I'd say, 'Man, this is something. This is special.'"

We salute you Chief, the king of the double-zero. Happy Birthday, Robert and many, many more!
Joel Pavón
Follow @Joe1_CSP