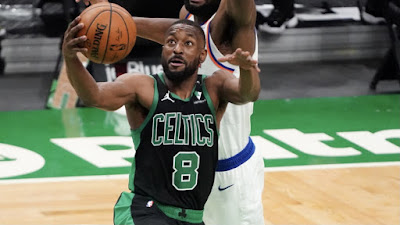 After being traded by the Celtics to the Oklahoma City Thunder back in June, Kemba Walker is reportedly heading back home to play for the New York Knicks.
According to ESPN's Adrian Wojnarowski, Walker has agreed to a buyout from the Thunder on the remaining two years, $74 million left on his contract and plans to sign with Knicks once he clears waivers.

Four-time All-Star guard Kemba Walker has agreed to a contract buyout with the Oklahoma City Thunder, and upon clearing waivers, plans to sign with the New York Knicks, sources tell ESPN.

NBA insider Jake Fischer reports that the Knicks are offering a "roughly $8 million in average annual value" to the 31-year old point guard.
Walker, a Bronx native, was dealt to the Thunder in return for Al Horford, as Brad Stevens' first official move as the Celtics new president of basketball operations. The four-time All-Star, who will join his former C's teammate in Evan Fournier -- also reportedly heading to the Knicks, averaged 19.3 points, 4.0 rebounds and 4.9 assists last season in 43 games played.
Semi Ojeleye, Daniel Theis find new homes
Two other free agents from the disappointing 2020-21 Celtics roster have found new area codes, according to ESPN. Semi Ojeleye is heading to Milwaukee on a one-year deal to join the reigning champion Bucks, while Daniel Theis is setting up shop in Houston following a sign-and-trade from the Chicago Bulls.
Joel Pavón
Follow @Joe1_CSP