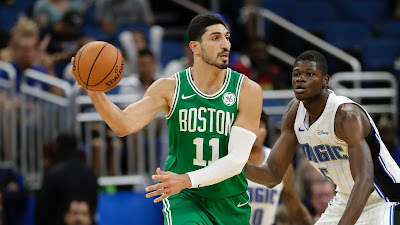 Enes Kanter is reportedly returning to the Celtics after being traded to the Portland Trail Blazers prior to the start of the 2020-21 season.
The 29-year old veteran center has agreed to a one-year deal, according to Shams Charania of The Athletic.


The Boston Globe's Adam Himmelsbach reports that Kanter's contract is worth about $2.7 million, the veteran league minimum for at least 10 years of NBA service.
Kanter averaged 8.1 points and 7.4 rebounds in his first stint with the Celtics during the 2019-20 bubble campaign before playing a bigger role last season with the Blazers where he put up 11.2 points and 11.0 rebounds in 72 games -- 35 of which were starts, while shooting a career-high 60.2% of his field goals.
The big man will have suited up for either the Trail Blazers or Celtics since 2018, as he joins Boston's frontcourt depth that includes Al Horford, Robert Williams III and Grant Williams following the trade of Moses Brown in the acquisition of Josh Richardson from the Dallas Mavericks over the weekend.
Joel Pavón
Follow @Joe1_CSP