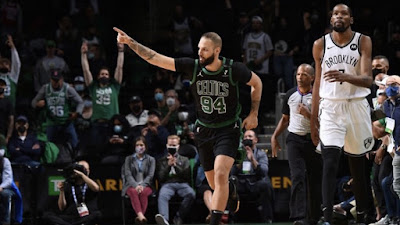 The Celtics traded for Evan Fournier with the plan to re-sign the veteran guard this offseason before the team shifted their priorities to create cap space for the 2022 free agency class instead.
According to ESPN's Adrian Wojnarowki, the New York Knicks swooped in Monday and agreed to a four-year deal worth $78 million with Fournier, which includes a team option for the fourth year.

Free agent Evan Fournier has agreed to a four-year deal that could be worth as much as $78M with the New York Knicks, source tells ESPN.

With Brad Stevens pulling off three major moves (two official ones at least) already since becoming the Celtic new president of basketball operations, it's obvious that the motive is to clear enough money for a max free agent next summer. Despite Fournier's 19.7 points per game average in Orlando prior to his arrival in Boston, the two parties were reportedly far apart when it came to contract negotiations.
Fournier played 21 games for the Celtics, including five in the first round of the playoffs loss to the Brooklyn Nets. He averaged 13 points per game in 16 regular season games, shooting 46.3% from 3-point range and 43.3% from beyond the arc while averaging 15.4 points in the postseason. But once he entered the league's health and safety protocol shortly after being traded, that impacted Fournier's shooting rhythm upon his return and he was later forced into the starting lineup once Jaylen Brown was out for the year with a wrist injury.
While only $17.5 million of the traded player exception was used of the $28.5 TPE created when Gordon Hayward was signed and dealt to the Charlotte Hornets last year to land Fournier, that allowed then Celtics GM Danny Ainge to ship two second-round draft picks to Orlando without having to match salaries. However the rest of the infamous "largest TPE in league history" was used this past weekend in order to acquire Josh Richardson in exchange for Moses Brown to the Dallas Mavericks.
The Celtics have been very quite since the start of free agency more than 24 hours ago, but the arrival of Richardson gives the Celtics a defensive-minded veteran guard who can also score as they're "Plan B" for now. With several reported free agent targets already signed such as Lonzo Ball and Patty Mills to long-term deals and at money that the C's weren't willing to spend, simply means Fournier and Stevens had different goals in mind this offseason.
The Knicks on the other hand, who finished with the fourth best record in the Eastern Conference last season, have now brought back Derrick Rose, Nerlens Noel and Alec Burk in addition to signing Fournier.
Joel Pavón
Follow @Joe1_CSP