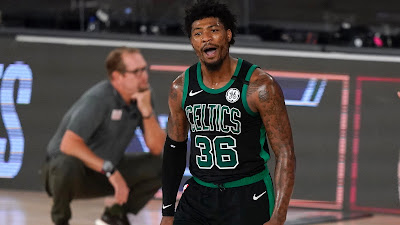 On Saturday, the Celtics formally announced the contract extension of Marcus Smart, who's the longest-tenured player on the roster.
Smart agreed to a four-year, $77.1 million deal, which means he'll be in Boston throughout the 2025-26 campaign.

“I love Boston and Boston loves me” - @smart_MS3 ✍🏾☘️ pic.twitter.com/0OUgNSmDyT

The seven-year veteran is approaching the final season of his current contract signed back in the summer of 2018.

"There's nowhere else I'd rather play and no other fans I'd rather play in front of. I love Boston, and Boston loves me," said Smart via a press release. "We've had some great moments and success in my time here, but there's more to accomplish. I'm ready to put that Celtics jersey back on and get to work out on the Parquet with my teammates."

Smart, a two-time All-Defensive First Team guard and a former sixth overall pick in the 2014 NBA Draft, is coming off a career-year offensively -- averaging highs in points (13.1) and assists (5.7) while playing 48 games (45 starts) this past season.
Celtics president of basketball operations Brad Stevens issued a statement following the official announcement of Smart's extension.

"We are thrilled to have the opportunity to extend Marcus, and thankful that he has chosen to remain a Celtic," Stevens said. "In his seven years in Boston, he has made a big impact, on and off the court. It is not a coincidence that every team he's played on has been in the playoffs, with several series wins throughout the years. He adds to winning on both ends of the floor, and competes with a grit and toughness that few match."

Stevens, who's coached Smart over the past seven seasons, has all but guaranteed that 27-year old will be the starting point guard for the 2021-22 Celtics, even after the signing of free agent Dennis Schroder last week. New coach Ime Udoka should be more than comfortable with having Smart run the majority of the offense.
Still, with all the changes to the Celtics roster this offseason there might not be a better choice when it comes the current core and appointing a leader long-term, one that has always left it all out on the floor.

"Obviously, you know what Marcus has meant to win here," Stevens during his Thursday presser. "And, I think that that's been very obvious that ever since he's been here we have been a good basketball team...

"I think the biggest thing that I've felt, as we've moved forward, is I want to be a team that Boston can really get behind," Stevens added. "That plays with a great edge, that plays with a grit and toughness that's necessary to compete at the very, very highest level. I think Ime and his staff will do a great job coaching to that and we have a lot of players that have proven themselves as competitors."

With this latest extension, it would take Smart well beyond the decade mark with the only franchise that has ever taken a risk on him.
Joel Pavón
Follow @Joe1_CSP