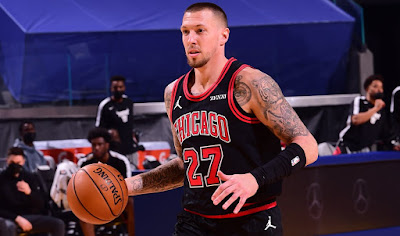 Former Celtics big man Daniel Theis is on the move again, as his time with the Chicago Bulls didn't last long.
According to ESPN's Adrian Wojnarowski, Theis has agreed to a four-year, $36 million deal with the Houston Rockets shortly after free agency opened Monday night.


The Rockets will use a $8.28-million trade exception from when they dealt Victor Oladipo to the Miami Heat to fit Theis' contract and the deal will be completed in a sign-and-trade, per Tim MacMahon. A new trade exception will be created for the Bulls to use in the future as well.
The 6-foot-8 center from Germany was acquired by the Bulls from the Celtics on the trade deadline last March. Theis, though considered undersized, is a good defender -- especially when it comes to the pick-and-roll. At 29 years-old, he was very productive for the Bulls, averaging 10.0 points and 5.9 rebounds in 23 games played (14 starts) for Chicago.
Prior to being traded, Theis put up 9.5 points and 5.2 rebounds while shooting 55.2% overall and 34.7% from 3-point range with the Celtics in 42 games played, including 37 starts last season.
Theis spent three and a half seasons in Boston before being moved to the Bulls and has career averages of 7.5 points on 55% shooting, 33.5% from 3 and 4.9 rebounds.
Joel Pavón
Follow @Joe1_CSP