Ime Udoka on Marcus Smart's role: 'We want him to take another step in his career' 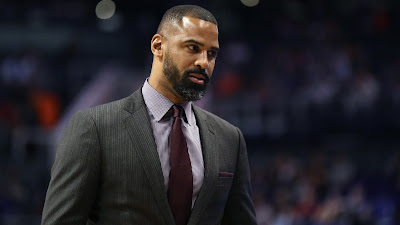 Celtics new head coach Ime Udoka has plenty of expectations for the upcoming season and one of them is to have veteran guard Marcus Smart take his game to the next level.
Smart, the longest tenured player on the roster, signed a four-year, $77.1 million extension last week -- a clear long-term commitment and investment from his former coach over the past seven seasons in Brad Stevens, now turned Celtics president of basketball operations.
Still, Udoka, who made an appearance at the WEEI/NESN Jimmy Fund Radio-Telethon on Tuesday morning, offered some insight on Smart's role for the 2021-22 Celtics.

"We're looking at a lot of different things," Udoka said regarding Smart, on the 'Gresh & Keefe' show. "He's obviously going to be called on to do a lot of things. But we haven't finalized our roster all the way yet, so depending on what we do there we can go certain different ways. But we've talked to him a ton about it and made it clear we want him to take another step in his career. And by giving him that extension we have full faith in him. He has done great things. The age, the toughness and the attitude he brings to the team is invaluable.
"For him to take another step is to have the ball in his hands more and be a playmaker and just be a great decision-maker for the guys. He realizes who he's playing with and I think that will be a benefit with the new mentality that he has."

While Udoka may hope for a new and improved Smart after playing his first seven years in Boston, the Celtics head coach also knows how he wants to approach the team's offense.

"We are going to play to guys' strengths, and I always say knowing your weaknesses is a strength. So we talk to guys about roles," said Udoka. "The league, in general, is a green light league and you have probably subpar shooters that are taking shots like they're 40-45 percent three-point shooters. We don't want to take away from their strengths, and their confidence. So we want to build on those things. But at the same time, you have to realize who you are playing within different roles. Things change over the years."

Smart is coming off his best season offensively, despite shooting 39% from the field, the 27-year old guard averaged a career-best 13.1 points and 5.7 assists per contest during the 2020-21 campaign in 48 games (45 starts).
However, the backcourt depth also includes second year guard Payton Pritchard, Josh Richardson and free agent signee Dennis Schroder, who Udoka believes is a good addition.

"Dennis (Schroder) has been a great starter and he has also come off the bench and done well in Oklahoma City and other places," Udoka added. "We want to build on everybody's strengths and be confident but at the same time know who you are playing with and know there is a pecking order within the team."