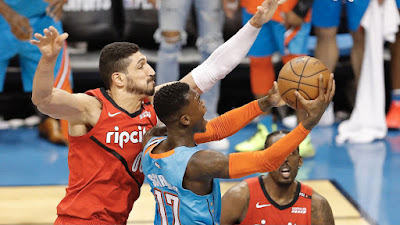 After making some early offseason trades and using little leftover cap space, Celtics new president of basketball operations has officially announced the signings of free agents Dennis Schroder and Enes Kanter.
Once Boston flipped Kemba Walker and Tristan Thompson for Al Horford, Josh Richardson, Kris Dunn and Bruno Fernando, they filled out their roster after drafting Juhann Begarin at  No. 45 overall in last month's NBA Draft -- with the additions of two veterans via free agency.
The Celtics used the taxpayer midlevel exception worth $5.9 million to sign Schroder on a one-year deal.

"We are really excited to welcome Dennis and his family to Boston," Stevens said in the team's official press release. "Dennis is a high-level player and competitor, who has consistently impacted winning with his play on both ends of the court."

Schroder is coming off a lone season with the Los Angeles Lakers, averaging 15.4 points, 5.8 assists and 3.5 rebounds on 43.7% shooting from the floor and 33.5% from 3-point range in 61 games played -- all starts. He finished runner-up in the Sixth Man of the Year voting during the 2019-20 campaign.
Kanter returns to Boston after signing a two-year deal with the Celtics in the summer of 2019, but was traded to Portland last offseason in order to bring in Thompson. He averaged 11.2 points and 11.0 rebounds on 60.4% of his made field goal attempts.

"Enes has a unique ability to both score and rebound," Stevens said in a separate press release. "Beyond his on-court contributions, he is a great teammate. We are thrilled he chose to return to Boston."

The ten-year center was also signed to a one-year contract, worth the veteran's minimum of $2.6 million. Kanter provides solid depth in the frontcourt behind Horford and Robert Williams, while being known as a double-double threat on any given night.
The Celtics also announced the two-way contract signing of undrafted forward Sam Hauser. The University of Virginia alum is coming off a season where he hit 41.7% from deep during his senior year. The 23 year-old caught fire Thursday night, finishing with a game-high 21 points on 6-of-10 from 3-point range in a blowout Summer League win over the Magic.
While it appears Tremont Waters is seeking a larger role elsewhere, the Celtics still have one other two-way spot available. Boston could still bring back fan favorite Tacko Fall, or Begarin, along with last year's second round pick Yam Madar are also being considered for a two-way deal.
At the moment, the Celtics have 16 signed contracts (one over the 15 limit) and one of two signed on an available two-way slot. Jabari Parker is also currently signed to a non-guaranteed deal, with an upcoming training camp roster that is still pending -- where a team can bring in up to 20 players.
Joel Pavón
Follow @Joe1_CSP