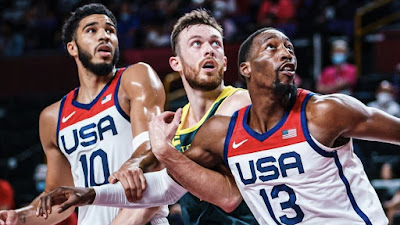 Team USA (4-1) is heading to their fourth straight gold medal game at the Olympics, this time in Tokyo, after a 97-78 victory over Australia (4-1) Thursday at Saitama Super Arena.
Kevin Durant finished with a game-high 23 points to go along with nine rebounds, as the Americans avenged an exhibition loss to the Boomers last month.
Devin Booker scored 20 points on 7-of-10 shooting, including hitting 3-of-5 from 3-point range, while Jrue Holiday added 11 points, eight rebounds and eight assists in the win.
Celtics All-Star Jayson Tatum chipped in nine points on 3-of-6 from behind the arc in 19 minutes off the bench.
Patty Mills, who has been known to be a nuisance for the U.S., led Australia with 15 points, five rebounds and eight assists. Dante Exum had 14 points and Jock Landale recorded 11 points, six rebounds in the loss.
The U.S. trailed the Boomers 41-26 with 5:23 remaining in the second quarter before using a 16-4 run to get within three at the break (45-42), which was capped off with a Durant buzzer beating 3 at the top of the key to give him 15 points at the end of the first half.

"When we pointed it out, they reacted," Team USA's coach Gregg Popovich said of the early effort. "In the last five minutes of the second quarter, they were fantastic, and it continued into the third. I give them credit for understanding the game as well as being able to accept the truth. Because you can be with some players that you can tell them something, but they don’t buy it because they can't handle certain kinds of criticism. But these guys want the truth, and they react to it."

Holiday hit the first two buckets of the third quarter to take a lead and Durant followed by scoring eight straight unanswered points, as the U.S. never trail for the rest of the game.

“We know teams are going to come out fast and hit us with a nice punch," said Durant in his postgame interview. "We know teams want to get us down early and see how we respond. A lot of these guys got continuity for years and years and know how to play with each other. I feel like a lot of teams are expecting us to fold early. We stuck with it and stuck with our principles, made a couple of scheme switches on defense, and we were able to get some momentum going to the half."

Olympic newcomer Booker also came alive in the period, scoring 11 points to help secure Team USA's lead for good.
Though only hitting 32.1% of their 3-point attempts, the Americans shot 51.4% overall from the field, limiting Australia to 41% shooting from the floor and outrebounding them 44-29.
The Boomers have never won a medal at the Olympics, despite reaching the bronze-medal game four times. Australia will face Slovenia (4-1) for a chance to win the bronze after Luka Doncic's triple-double of  16 points, 10 rebounds and 18 assists wasn't enough in a 90-89 loss to France (5-0).
Meanwhile, Team USA, who has won four straight since their opening loss in group play to France, will take on Les Bleus in a rematch for a chance at a gold medal. Tip-off is scheduled for Friday night at 10:30 PM EST.
Joel Pavón
Follow @Joe1_CSP