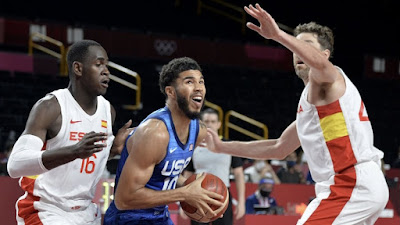 Team USA (3-1) survived the quarterfinals after a 95-81 victory over rivals Spain (2-2) on Tuesday at the Saitama Super Arena and are now heading to semis of the 2020 Tokyo Olympic Games.
Kevin Durant scored 13 of his 29 points in the third quarter to lead the Americans, while Jayson Tatum added 13 in 18 minutes off the bench and Jrue Holiday chipped in 12.

"The game is about buckets," Durant said during his postgame presser. "When you see the ball go in the rim, everybody's got more energy — coaches, players, trainers, everybody. We started making shots, made some 3s, and guys calmed down and made some stops."

Ricky Rubio finished with a game-high 38 points on 13-of-20 shooting for the 2019 FIBA World Cup champions. Sergio Rodriguez had 16 points and Willy Hernangomez notched a double-double of 10 points, 10 rebounds for Spain, who the U.S. has beaten in two of the last three Olympic gold-medal games.
A 10-0 run by Spain gave them a 39-29 lead after seven straight missed shots by Team USA with 3:25 left in the second quarter, before the Americans used a 14-4 spark to make it 43-43 at the half -- after making only 4-of-17 from 3-point range.

"They played with extreme energy to start the game, and we were a little sluggish," Durant said. "We didn't shoot the ball well, and that kind of affected our defense a bit. But we got into it at the end of the second quarter and were able to get stops, get some scores and battle and try to get some momentum. In that third quarter, we knew exactly what we needed to do."

Durant connected on back-to-back 3s, as Team USA hit five of their first six 3-point attempts to open the third quarter. Spain didn't score in the first six minutes of the second half, while the U.S. went on a 22-6 run to grab a 65-49 advantage -- which combined with the end of the first half gave them a 36-10 burst to stay ahead for good.
Team USA shot 48% from the floor and 40.6% from distance, while Spain hit 45.3% of their total attempts and 30.4% from behind the arc, but also won the rebound battle 42-32.
Since their loss to France, Team USA has improved in every single game in the quest to win the gold medal. They will face Australia and look to avenge an exhibition loss from last month come Thursday in the semifinals, as tip-off is scheduled for 12:15 AM EST.
Joel Pavón
Follow @Joe1_CSP