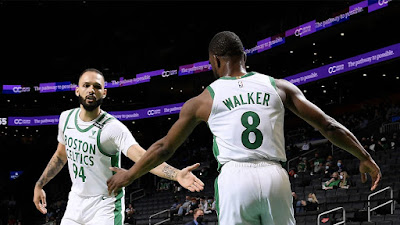 The Celtics have finalized the sign-and-trade of free agent guard Evan Fournier with the New York Knicks Tuesday morning, per Marc Stein.
Boston sent two-future second round draft picks, including a top-55 protected 2022 Hornets second rounder from the Gordon Hayward sign-and-trade last year, in exchange for a reported $110,000 in cash from the Knickerbockers. The Celtics also created $17.1 million traded player exception to officially complete the deal for Fournier.
The Knicks and the veteran guard agreed to a four-year, $78 million deal back at the start of free agency, while they also signed recently waived and former Celtics All-Star Kemba Walker to a two-year contract reportedly worth roughly $18 million.
Danny Ainge's last trade before stepping down as the Celtics president of basketball operations was for Fournier (using $17.1 million of Hayward's TPE) from the Magic before the deadline back in March, while new GM Brad Stevens used the remaining $11.1 million of the Hayward TPE ($28.5 million) to acquire Josh Richardson from the Mavericks.
The Celtics now have three significant TPE's to work with this season, despite having a handful of smaller exceptions that are realistically unusable.

They have a few smaller ones, but they aren't really usable.

Reminder: TPEs can NOT be combined, nor aggregated with player salaries.


The Daniel Theis TPE will need to be used by the 2022 trade deadline sometime in mid-February. Both the Fournier and Tristan Thompson TPEs will expire in the offseason next summer.
Joel Pavón
Follow @Joe1_CSP