How Payton Pritchard's summer could be far from over 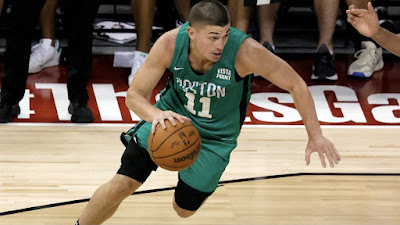 The summer of Payton Pritchard has been quite the ride for the second-year Celtics guard, who is coming off scoring 92 points at the Portland Pro-AM.
After getting off to a great start in the C's first three NBA Summer League matchups over the past week, it was announced that Pritchard wouldn't take part in anymore Las Vegas games.
No one realized that the "prior engagement" meant Pritchard had discussed with the team about playing in a different summer league. The 23-year old was on the winning side of a 165-163 nail bitter.
Former Celtics fan favorite and All-Star Isaiah Thomas dropped 81 points just days ago at The Crawsover.
While it seemed that Pritchard wouldn't return to Vegas after averaging 20.3 points, 8.7 assists, 4.7 rebounds, 2.0 steals and 1.3 turnover per game on 51.4 percent shooting on 37 shots, the young guard tweeted out that he'd be playing in the Summer League championship game following the Celtics blowout win over the 76ers Saturday night.

Back in Vegas on Tuesday for summer league chip! https://t.co/Ns0bJWvYEl

Despite Payton Pritchard's tweet, it's not a given that he will actually participate in tomorrow night's game according to Joe Mazzulla


Whether Pritchard plays or not, his confidence is at an all-time high as training camp is two months away. He continues to enjoy his summer, which began with throwing out the first pitch at a Red Sox home game last month. How many non-professional baseball players can actually say they threw a strike right down the middle at Fenway Park?
ESPN will have the Summer League championship game between the Celtics (4-0) and Kings (4-0) tip-off at 9:00 PM EST tomorrow night.
Joel Pavón
Follow @Joe1_CSP