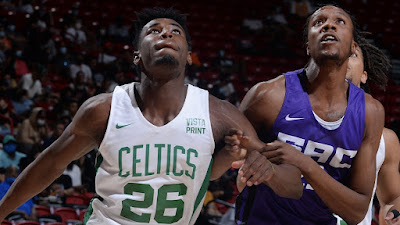 The Celtics came up way short of their first Summer League trophy Tuesday night, as they got stomped on by the Sacramento Kings to lose in the Las Vegas championship game 100-67.
Carsen Edwards led Boston with a mere 15 points on 16 shot attempts, while Aaron Nesmith added 12 points, as the only two to reach double-digits in scoring.
Despite the Celtics, who finished 4-1 in Vegas, not reaching the ultimate goal of capturing the Summer League title, there was definitely growth and development that couldn't be overlooked over the past two and a half weeks as a roster.

Bruno Fernando scored nine points and Payton Pritchard returned from his "prior engagement" to chip in six points on 3-of-9 from the field, six rebounds and eight assists (six turnovers), after coming in averaging 20.3 points, 8.7 assists, 4.7 rebounds, 2.0 steals and 1.3 turnover per game on 51.4% shooting.

"It's a humbling experience," Nesmith said to reporters after the loss. "We played really well the first four games and kind of blew teams out, and to come into this game and kind of be on the other end of the story, it hurts. It sucks. But's just motivation to get right back to the drawing board tomorrow morning and get right back to work."

Louis King had a game-high 21 points, to go along with five steals, while Jahmi'us Ramsey scored 16 points and Matt Coleman III netted 14 points to lead the Kings to their second Summer League championship and a perfect 5-0 record.
After holding Philadelphia to just 80 points Saturday night, the Celtics looked like they were on their way to another dominating performance with a 12-2 advantage to start the first quarter before the Kings went on a 12-0 run to grab a 24-20 lead to end the opening frame.
The Celtics shooting woes would began in the second period and turnovers would lead to Boston's downfall. The Kings forced 13 first half turnovers and won the battle of the offensive glass 14-1, while the C's were only 4-of-17 from behind the arc to trail 44-36 at the break.
Both teams struggled to get any offense going in the first three to four minutes of the third quarter, but Sacramento's defense led to forced Celtics' shots and six more turnovers. The Kings were up 53-40 at the 6:23 mark, which was the largest lead of the game at that point, as the deficit ballooned to 21 within the next four minutes. The C's managed to record just 13 points throughout the period.
It didn't get much better the rest of the way for Boston, as they scored 31 total points in the second half and turned the ball over 10 more times in the final frame to finish the night with 29 turnovers. The Kings had 18 steals and held the Celtics to 39% shooting from the field, including 7-of-36 from 3-point range (19.4%).
It was not the best of endings for the Celtics, but players like Nesmith took full advantage of the Summer League experience after not getting to last year. The 21-year old forward wrapped up his first Summer League with averages of 17.4 points and 6.2 rebounds in five games. He shot 50.0% and 36.1% from 3, displaying more versatility than he did toward the end of his rookie season and hopefully it will translate into training camp in the upcoming months.

"I did a better job of becoming a more multidimensional player, moving the ball, putting the ball on the floor, finding open teammates, taking confident shots," Nesmith said. "That's what I think I expanded [in Vegas]."

Other than Nesmith, the same could be said Pritchard, Romeo Langford -- who sat out Tuesday with a wrist injury, Edwards, Fernando and Sam Hauser, all of whom have shown improvements and had individual moments throughout the Celtics' five Summer League games.
Joel Pavón
Follow @Joe1_CSP