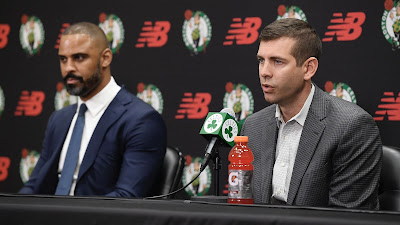 Celtics president of basketball operations spoke to the media Thursday at the Red Auerbach Center about his first offseason at the helm and the roster moves made.
Just a day after the conclusion of NBA Summer League, Stevens addressed the Josh Richardson trade, the signing of Dennis Schroder and Enes Kanter, while also suggesting the Celtics made all the planned moves they wanted to make.

"Obviously we have 16 players on the roster right now and so most tweaks would be around the edges via potential moves," Stevens said during his press conference. "But there's nothing imminent, and there's nothing that I think is a certainty by any means. We will continue to monitor that and discuss those things as we go through the next few weeks, and then we'll continue to monitor that as we go through the first part of the season."

While Stevens' presser may have marked an unofficial end to the offseason, the Celtics will have to make a cut even if it doesn't happen sooner rather than later.

"We still have a lot of work to do just generally," he said. "Some around the edges with the roster and some around making sure that now we can focus on some other things from an operational standpoint. So there's a lot to do."

But overall, Stevens seems pleased with the addition of Richardson using the team's TPE and is expecting the veteran guard to have a better season shooting wise, especially from 3-point range.

"He's always been a good shooter and our numbers would say that when he gets the open opportunities, he's better obviously than he shot last year," Stevens said. "But he wants to win. Like winning is really important to him. I think the way that he separated himself when he joined the league with him being a mid-second-round pick was he showed his competitive character out of the gate. I think that that is something that we're looking forward to adding to our team."

As for Schroder, no one was more surprised than Stevens that he was still available on the free agent market, as the combo guard agreed to a one-year at the taxpayer mid-level exception -- which helps the Celtics avoid being hard-capped.

"If you would have asked me on the first day [of free agency], first two days, it probably would be unlikely that we would be able to be in play for him," Stevens said. "But he is, again, super edge, super competitor, is a guy that can impact the game at so many levels and plays both ends of the court."

After getting a taste of the NBA game during Summer League, the Celtics two young draft and stash prospects in Yam Madar and Juhann Begarin are heading back overseas to get some more valuable experience in the hope of making an impact back here in the future.

With the term "flexibility" being used quite often this summer when it came to the Celtics roster taking shape, Stevens maintains that the makeup of the team should be gritty this season -- something that new coach Ime Udoka can certainly get behind and not just on defense.

"Obviously there's two sides of the ball, and to win you have to play both sides well," Stevens said. "To be a great team, and a team that's in the mix, you should probably be in the top five or six on both sides. We'll see where we land when we get together, and how we play, and how we fit together and everything else, but we have a lot of good players, and that's exciting."

Though there is still work that needs to get done before the Celtics finalize their roster, Stevens seems more than content with the changes made as the start of 2021-22 season is just around the corner.

"I think the biggest thing that I've felt, as we've moved forward, is I want to be a team that Boston can really get behind," Stevens said. "That plays with a great edge, that plays with a grit and toughness that's necessary to compete at the very, very highest level. I think Ime and his staff will do a great job coaching to that and we have a lot of players that have proven themselves as competitors."