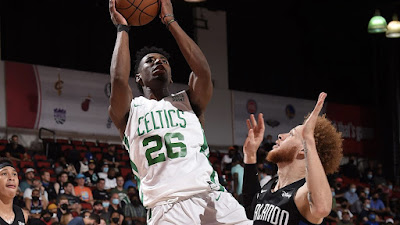 It was another dominating performance for the Celtics (3-0) as they cruised by the Orlando Magic (1-2) Thursday night to a 108-71 victory to remain undefeated in the 2021 Las Vegas Summer League.
Sam Hauser finally found his grove when he hit 6-of-10 from 3-point range to finish with 21 points to lead all scorers and also dish out seven assists for Boston off the bench.

"The first two games I was kind of getting used to [the game speed] and couldn't make a shot. But I think in this third game, I really got my legs underneath me and adjusted

"What separates good point guards from becoming great is the ability to make people around you better, get people easier shots, and control the game...Obviously that's what I'm trying to become, so I'm going to keep working on that."

Tahjere McCall led the Magic with 12 points, as he was the only player on his team to finish in double figures in scoring. No one else scored more than eight for Orlando, who shot 37% from the floor, including going 9-of-33 from behind the arc.
Nesmith picked up where he left off in Boston's win over the Nuggets on Tuesday, scoring seven in the opening quarter. The Magic were held to 19 in the first frame before Pritchard netted eight of his 11 first half points in the second period.
The Celtics led 50-31 at the break, as they continued their hot shooting in the third quarter to go ahead by as many as 44 at one point.
For the second straight game the Celtics have scored 107 points, but this time they set a new Summer League record of 33 assists. Boston also hit 19 from deep on 44 attempts for 43.2% shooting.
The Magic only finished with 13 assists as a team, while committing 15 turnovers on the night. They also lost the rebound battle 42-33.
The Celtics look to go 4-0 when they face the Philadelphia 76ers Saturday, as tip-off is at 5 PM EST on NBATV.
Joel Pavón
Follow @Joe1_CSP