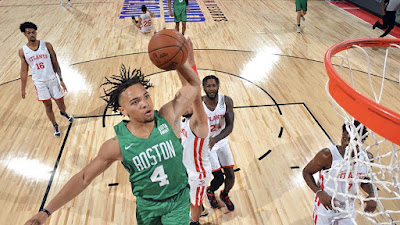 The Celtics overcame early shooting woes to beat the Hawks 85-83 in their Las Vegas Summer League opener Sunday afternoon.
Boston fell into a 10-0 hole after missing their first eight shot attempts to start the game, thus turned it around with 17-2 run to get back on track.
In a tight fourth quarter down the stretch, it was Romeo Langford (12 points) who hit a go-ahead 3-pointer with 11 seconds left before last month's second round draft pick Juhann Begarin (seven points) stole Atlanta's inbound pass on the very next play to seal the win.
Payton Pritchard finished with a game-high 23 points on 7-of-15 from 3-point range, to go along with five rebounds and five assists. Carsen Edwards scored 17 points, grabbed eight rebounds and handed out six assists, while Aaron Nesmith added 11 points for the Celtics, who are 1-0 in Summer League play.
Jalen Johnson recorded a double-double of 20 points, 10 rebounds for the Hawks (0-1). Skylar Mays had 13 points and Max Heidegger netted 12 points in 15 minutes of action in a loss to fellow Israeli Yam Madar.
Madar was the key cog in the Celtics turnaround once they trailed by ten midway through the opening quarter, as he scored the team's first field goal and had a couple of assists to total eight points on 4-of-6 shooting in 17 minutes off the bench.

"He turned it around for us with his energy," said Pritchard in his postgame presser of Madar's performance. [He] hit some tough shots, but also his defense -- getting hands on balls. We started off the game down 10-0, so he came in and brought that energy, that activeness and it carried over for all of us."

As for Langford -- who nailed a clutch shot in the win, Pritchard believes that if his teammate's confidence carries into the upcoming season it will be huge plus for his development.

"It's going to expand his game tremendously," said Pritchard of Langford. "He has the ability to pass, drive, (play) defense and so once that three-ball keeps coming like he hit at the end of the game, he's going to be a problem."

Begarin's steal following Langford's 3, proved to be the play of the game, as the Hawks were set to inbound the ball at halfcourt. Begarin executed a switch on Mays, jumping into the passing lane to pick off Sharife Copper and preserve the win. The 6-foot-5 wing was a late addition to the Celtics Summer League roster, after telling reporters on Thursday he asked Brad Stevens to play.
Despite the win, it wasn't the prettiest of shooting displays for the Celtics, hitting 38.3% from the floor and 31.4% from deep. Among those that struggled with their shooting was Two-Way signee Sam Hauser -- who went 2-of-7 from the field, including 1-of-7 on long-balls for only five points.

"We all [struggled to shoot]," Edwards told NBATV immediately after the game. "At the same time we all trying to get in the flow, get in a rhythm, we were just trying to focus on stops. Even though we weren’t making shots, we said let's get some stops and try to get going."

The Celtics will face the Denver Nuggets on Tuesday from Vegas, tip-off is at 7:30 PM EST on NBC Sports Boston.
Joel Pavón
Follow @Joe1_CSP