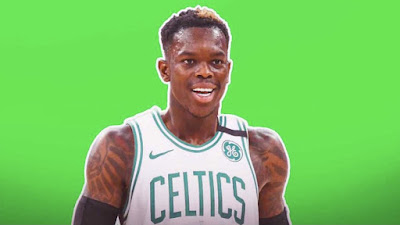 The Celtics and Dennis Schroder have reportedly agreed to a one-year, $5.9 million deal -- which is the taxpayer Midlevel-Exception, according to ESPN's Adrian Wojnarowski.
Boston didn't end up shedding any salary to sign the 27-year old veteran guard and they'll not be hard-capped due to Schroder taking the taxpayer MLE instead of the non-taxpayer MLE.

Deal will be for the $5.9M exception, per source.


Despite Jordan Schultz reporting that Schroder was seeking the full MLE worth $9.5 million and a second year player option while negotiating with the Celtics, Brad Stevens and the front office held firm on their original offer from a few days ago.
Schroder is coming off a lone season with the Los Angeles Lakers, averaging 15.4 points, 5.8 assists and 3.5 rebounds on 43.7% shooting from the floor and 33.5% from 3-point range in 61 games -- all starts.
This is a low-risk, high-reward deal for the Celtics, while Schroder gets to rebuild his stock for next summer's free agency market -- after turning down a reported four-year, $84 million extension from the Lakers back in March. If things go south chemistry-wise, Schroder's salary can easily be moved come the trade deadline.
While it's relatively still early to assume Schroder will play alongside Marcus Smart in the backcourt as a starter or come off the bench in a sixth-man role, the move gives the Celtics another combo-guard who's a solid defender on the perimeter and a veteran presence in the locker room.
Look for the Celtics to also potentially move newly acquired Kris Dunn or Bruno Fernando before filling out a training camp roster.
Joel Pavón
Follow @Joe1_CSP