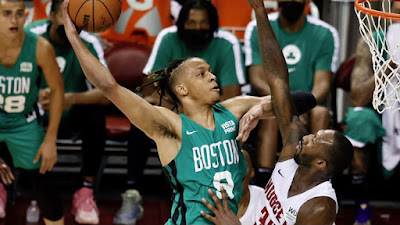 The Celtics (2-0) shot over 50% from the field in their 107-82 blowout victory over the Denver Nuggets (0-2) Monday night to remain undefeated in Las Vegas Summer League play.
It took only 48 hours for Boston to improve from their 38.3% shooting in Sunday night's win over the Hawks, as Aaron Nesmith finished with a game-high 33 points (13-of-18), including connecting 7-of-9 from deep to go along with seven rebounds in just under 21 minutes of action.

"In the gym yesterday, I made sure I went through the same routine, changed nothing, kept the same confidence in my shot and then came out today and just shot it the way that I know I can everyday," said Nesmith in his postgame presser.

"I think he did a great job just knowing what the game needed, and the game needed for him to just make the right play for other people," said Celtics Summer League Head Coach Joe Mazzulla to reporters via Zoom of Pritchard.

Bol Bol led the Nuggets with 26 points (8-of-12), nine rebounds, while Nah'Shon Hyland netted 16 points and hauled down seven rebounds.
The Celtics jumped out to a 19-11 advantage halfway through the first period before Denver used a 8-0 run to tie it up at the 3:45 mark. Edwards hit a go-ahead 3 on the following possession and Boston didn't trail for the rest of the night.
With a 31-23 lead to start the second, the Celtics went on a 17-3 spurt to to make it a 20-point deficit for the Nuggets, as Boston kept pouring it on for the rest of the first half.
Romeo Langford (eight points) had the highlight of the game late in the third quarter when he came up with loud slam over Davon Reed following a drop-off pass from the newest addition to the Celtics Summer League roster -- Bruno Fernando.
The 6-foot-4 Langford took one dribble after he caught the ball and cocked it back for monstrous posturizing of poor Reed that has since gone viral.


The dunk even got a reaction from newly acquired Fernando, who says he's excited to have the chance to play and display his skills, as he got the start at center and scored nine points.

The Celtics had 25 assists to 12 turnovers, while the Nuggets had 14 dimes and turned the ball over 15 times.
Boston will look to go 3-0 when they face the fifth overall pick in last month's NBA Draft Jalen Suggs and the Orlando Magic Thursday night. Tip-off is at 7:00 PM EST on ESPN2.
Joel Pavón
Follow @Joe1_CSP