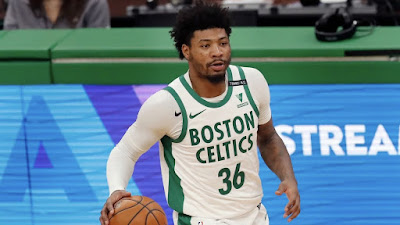 According Mark Murphy of the Boston Herald, the Celtics and Marcus Smart are currently in negotiations on a contract extension.
Murphy reports that the extension for the longest turned Celtic is in the ballpark of $17 million over four years.

Hear that the three-team trade (Bos.-ATL-Sac) will be announced soon, unchanged. ... Celtics await a response from Smart agent Jason Glushon, but are said to be willing to extend him for roughly $17M over four years.


Former Phoenix Suns executive, now turned NBA insider Ryan McDonough broke down the frame work of the proposed extension and the most the Celtics can offer which is roughly $77 million.

The Celtics appear to be offering Smart the largest possible extension they can give him at the moment, per @Murf56

Here are some more details on the largest extension Smart could sign:


Smart is entering the final season of a four-year, $52 million deal he signed in the summer of 2018. His current salary is worth $13,839,285 and if you add this potential $77 million total, the Celtics would have the veteran guard essentially at $91 million for the next five years -- a bargain to say the least.
The 27-year old is considered one the top defensive guards in the league, winning back-to-back NBA All-Defensive First Team honors in 2019 and 2020. Smart put up a career-high in points (13.1) and assists (5.7), while also leading the Celtics in dimes as a secondary ball-handler to Kemba Walker last season. He also averaged 3.5 rebounds, 1.5 steals, shot 39.9% overall, 33% from 3-point range and 79% from the free throw line.
While the extension is pretty close to the $80 million Smart was reportedly seeking earlier this week, the team friendly deal allows the Celtics to easily move his salary if need be in a possible sign-and-trade for another All-Start such as Bradley Beal next summer.
After changing his agent to Jason Glushon this offseason -- who also represents Jaylen Brown, Jrue Holiday and Duncan Robinson, among others -- it's now up to Smart to make the next move if he agrees on the pay raise or not.
Joel Pavón
Follow @Joe1_CSP