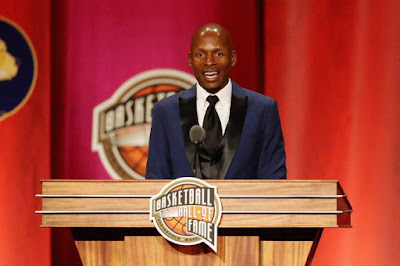 For Ray Allen, early mornings, lone workouts and long hours in the gym was his favorite part of his journey.

The two-time champion valued his daily routine more than anything and it ultimately led him to Springfield, where he was enshrined Friday evening as a member of the class of 2018 Naismith Memorial Basketball Hall-of-Fame. It came as no surprise when Allen reminded everyone of his work ethic during his 18-minute speech, when he explained that the effort one puts in to perfecting their craft is far more important than one's God-given abilities.


"I don't believe in talent," Allen said. "I'm here because I worked hard my whole life. Without that work, nobody in this room would know who I am expect my family. So to all the kids around the world watching, paying attention, and aspiring to be like one of us on this stage some day, put the work in and watch the magical ride you go on."

Throughout his 18 years in the NBA, Allen vigorously worked on his craft every single day. But he fell in love with the sport long before then, and talked about how it all started -- his path -- and what it took to ultimately reach the hall.

"There's one person here that I have to mention their name," Allen said. However, the person he was referring to wasn't in attendance, but already enshrined and considered one of the greatest to ever play the game.

It was Michael Jordan. Allen told a story about the first time he witnessed Jordan dunk a basketball and how he vowed to one day emulate MJ's airness. It was then Allen decided to take the game a bit more seriously.

He transitioned to talking about his days of playing early morning five-on-five pick-up games with his father every Saturday at an Air Force Base in Dalzell, South Carolina and how he one day dunked on his dad when the two ended up on opposite teams. But it was at the University of Connecticut under the grooming of coach Jim Calhoun where Allen learned the importance of being the first to arrive and the last to leave the practice facility.

If you want to be great, that's what it's going to take, Calhoun told Allen. The advice struck a cord, and soon became the philosophy of his professional career.

Calhoun, who was in attendance, smile and nodded after Allen said he wouldn't be standing in Springfield if it weren't for the guidance of his alma mater's head coach. He applied those teachings at the pro level, which included a stop in Boston -- where he earned his first opportunity to win an NBA title.


"It wasn't until my 12th year [when I joined] the Boston Celtics, where I paired up with a couple of future Hall of Famers in Paul Pierce and Kevin Garnett," Allen said. "Never in my wildest dreams would I have imagined that I'd be on the stage, so all of this to happen it took the basketball mind of Danny Ainge to make it possible, so thank you, Danny."

Ainge was in attendance in support of Allen, and another inductee -- Steve Nash -- who also mentioned the Celtics president of basketball operations during his speech. As for his 2008 teammates, it was the only mention of Paul Pierce and Kevin Garnett.

After talking about his time in Miami -- where he captured his second title -- Allen reiterated the fact that it wasn't the moments of winning championships that he fell in love with but rather the tedious daily routine that led him to the big stages.

"That's when you became a champion, repeating those boring old habits every single day, performing your craft, getting on the treadmill, eating breakfast every morning, hitting the gym, lifting the weights. This was my routine every single day. And what's most incredible about it, is that I loved it. I wouldn't have rather been anywhere else in the world."