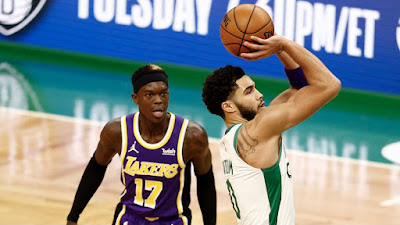 Dennis Schroder remains an unrestricted free agent after a week of free agency signings, as the former Los Angeles Lakers guard was essentially replaced following the blockbuster trade for superstar Russell Westbrook.
While teams like the Dallas Mavericks, Miami Heat and New Orleans Pelicans, who were in search for a veteran point guard and have already spent their money, but one team that is still in need of filling the position are the Celtics.
According to Jake Fischer of Bleacher Report, Boston and Schroder are in talks on a possible deal for the 27-year old.

The Celtics are engaged in conversations to add free agent point guard Dennis Schroder, according to league sources. Talks are still ongoing as Boston looks to address its need at point guard https://t.co/9iZfeY2kqv

Michael Scotto of HoopsHype, reported that the Celtics could agree upon a short-term deal for Schroder of either a one-year or two-year contract (with a player option), using the non-taxpayer mid-level exception, per a league source.
Despite Schroder seeking a long-term deal, the Celtics want to have flexible cap space for the free agency class of 2022. Either way, both parties can help each other by coming to an agreement on a competitive salary that would get Schroder back into the free agent market next summer while the C's plug a hole at the starting point guard spot.
Of course, assuming the Tristan Thompson, Kris Dunn, three-team trade with the Sacramento Kings and Atlanta Hawks officially goes through, Brad Stevens will have a better idea of how much he could potentially offer Schroder. Plus, with the signing of Enes Kanter, the Celtics could be out of roster spots as well.
Adam Himmelsbach of the Boston Globe, tweeted out on the day of the proposed trade that would land Dunn in Boston, that the guard's $5 million salary could also be moved in a separate deal.
Himmelsbach also reports that while the Celtics and Schroder have "some mutual interest," it's not likely a deal will come about via a sign-and-trade.
Schroder finished second in Sixth Man of The Year voting for the 2019-20 campaign before being traded to the Laker from the OKC Thunder for Danny Green prior to the start of this past season. He averaged 15.4 points, 3.5 rebounds and 5.8 assists while starting all 61 games played in L.A. last year.
Joel Pavón
Follow @Joe1_CSP