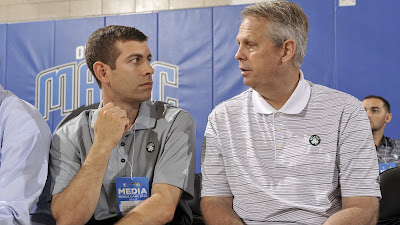 Brad Stevens has been the Celtics president of basketball operations over the past two months and though he's enjoyed being on the job, its also had some challenges.
Stevens made an appearance during the WEEI/NESN Jimmy Fund Radio-Telethon on Tuesday afternoon to discuss how he's gone from being the Celtics head coach for seven seasons to now being in the front office and he didn't know what to expect once Danny Ainge stepped down.

"There was a lot of angst in the first month," Stevens said on the OMF show. "I had the least amount, even with the change, just because of all the people that are in the building going through a transition, and my coaching staff may or may not be retained. But as people have found their opportunities, as people have settled into how we function and work together, it's been a great challenge. The first couple of weeks were like drinking out of a fire hose, and then it slowed down after hiring Ime [Udoka]. And then, right before the draft and free agency, right back to it.

The first official move made by Stevens was trading four-time All-Star guard Kemba Walker for old friend Al Horford -- a decision he felt had to be made for the Celtics -- even before hiring a new head coach in Ime Udoka.

"There are a lot of things that go into each and every decision," Stevens explained. "Trading Kemba right off the bat was not fun and was not an easy thing to do but obviously the opportunity to get Al [Horford] back and some of the things that it opened up to be able to do here as we try to build towards the future -- it was just part of it."

In the weeks since, Stevens has signed Dennis Schroder to a very discounted one-year deal and Enes Kanter, while giving contract extensions to Marcus Smart, young big man Robert Williams and veteran guard Josh Richardson, who was acquired via a trade with the Mavericks and was absorbed into the remaining Gordon Hayward TPE.
Stevens has quickly learned about the importance of the Celtics salary cap and how to create financial flexibility when at all possible.

“The salary cap is no joke," Stevens said. "And as much as I've been around it the past eight years, I'm really lucky I have people working here -- the Mike Zarren's, the Austin Ainge's -- and everybody else in our front office who does a great job."

Still, Stevens also understands that unlike college, the NBA is a business where you don't usually get that relationship with a player for four or five years. Despite the Celtics having a young core that has been together over the past few seasons, the changes made this summer have put the team in a good position to compete.

"As you look across the league, I feel really good about where we are now," Stevens said. "I feel like we can be a good basketball team, but I think we can also continue to build and hopefully get what we all want."