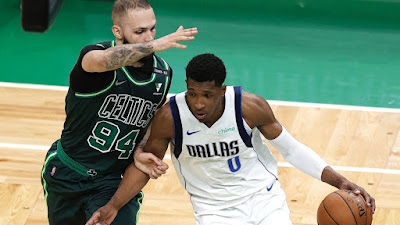 The Celtics have signed guard Josh Richardson to a one-year contract extension, the team announced Tuesday afternoon.
Shams Charania of The Athletic, first reported the deal Monday night, as Richardson is set to make roughly $24 million over the next two seasons.

New Boston Celtics G/F Josh Richardson has agreed to a one-year extension that pays him $24 million over the next two seasons, agent Erik Kabe of @BDA_Sports told @TheAthletic @Stadium.


Richardson, who was acquired via a trade with the Dallas Mavericks last month for Moses Brown, was absorbed into the remainder of the world famous Gordon Hayward TPE after the 6-foot-5 guard opted in to his 2021-22 player option worth $11.6 million.

"We feel fortunate to be able to extend Josh," said Celtics President of Basketball Operations Brad Stevens in a press release. "He is a talented offensive player, a versatile defender, and plays with an edge and toughness that Boston fans will love."

With Celtics' free agent Evan Fournier heading to the New York Knicks in a sign-and-trade, suddenly Richardson -- a veteran wing that can defend and shoot -- being under contract through the 2022-23 makes more sense and could even be viewed as an upgrade without breaking the bank.
Richardson played for the Miami Heat and Philadelphia 76ers before his lone year with the Mavs, where he averaged 12.1 points (42.7% FG 33.0% 3-PT, 91.7% FT), 3.3 rebounds, 2.6 assists, 1.0 steals, and 30.3 minutes in 59 games (56 starts) during the the 2020-21 campaign.
This is now Stevens' third extension over the past week following the Celtics locking up Marcus Smart at four-years, $77.1 million and Robert Williams III at four-years, $54 million. Just when you thought "Trader Brad" was more than likely done making offseason moves, he could still have a trick or two up his sleeve before the start of training camp.
Joel Pavón
Follow @Joe1_CSP