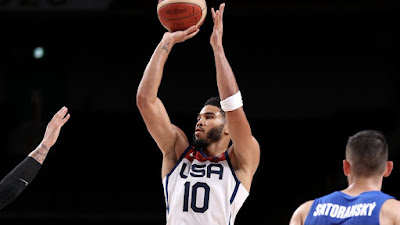 Team USA (2-1) has advanced to the quarterfinals of the Tokyo 2020 Olympic Games with a 119-84 victory over the Czech Republic (1-2) Saturday at Saitama Super Arena, to conclude Group A play.
The win locks up second place in the group behind France (3-0), who finished undefeated, meaning the Americans won't face any of the other group winners until at least the semifinals.
Jayson Tatum had his best performance of the first round, leading all scorers with 27 points -- 21 of which came in the second half. The Celtics All-Star shot 10-of-16 from the field and 5-of-10 from 3-point range in 24 minutes of action off the bench.

"I felt good," Tatum said in his postgame presser. "I knew that myself and the rest of the team, we just had to pick up the intensity a little bit. It was kind of close in the first half. And to get some more stops, we'd be able to get in transition, you know, get it out to guys and have guys make plays."

Tatum nearly doubled his scoring output from Wednesday's Team USA blowout win over Iran and together with Kevin Durant's 23 -- they combined for a total of 50 points between the two.

"It was a good night," Tatum added. "The game just opened up in the second half, the way we were moving it. Obviously, we're starting to shoot the ball better now than we did in the first game, and we're getting more comfortable."

"You just think about all the players that have played in this program," Durant said via Zom. "It's pretty cool to be amongst names like that. Carmelo is a guy that I played on two Olympic teams with, and I've seen his approach to these games and I’ve tried to steal some of his techniques.

"It's still pretty weird for me to do stuff like this because I play a team sport, and I try my hardest to make it about the group. But it is special to do something like that. Scoring is something I've worked on my whole career and expanded my whole career. To consistently do it is pretty cool."

Blake Shilb led the Czech Republic with 17 points, 14 of which came in the first half. Captain Tomas Satoranksy totaled 12 points, six rebounds and eight assists. Big men Ondrej Balvin and Jan Vesely caused problems in the paint for the U.S, as they combined for 28 points in the loss that officially eliminates them from the Olympics.
It was a slow start for Team USA to which the Czechs jumped out to a 9-2 lead and the Americans were held to 4-of-12 from beyond the arc and an 18-point first period.
Despite a 25-18 deficit to start the second quarter, Team USA scored 39 points to end the half and take a 60-51 advantage into the break.
The U.S. would never trail for the rest the game, as they found their 3-point stroke and used a 10-2 run to take an 11-point lead. Durant scored 10, including a 3 at the buzzer to end the quarter and put his team up 82-60.
Tatum's hot shooting in the final frame keep the game out of reach, with Team USA hitting 16-of-30 of their 3-pointers in the final three quarters following their rough start from beyond the arc. They also hit 63% of their attempts from field overall, while the Czechs shot 50% from the floor and 8-of-18 from 3.
If the U.S. is the top second-place finisher, it will enter the quarterfinals in Pot D with the three group winners. The other two second-place group finishers and the top two third-place group finishers will make up Pot E.
There will be a draw to find out the Pot D and Pot E teams in their quarterfinal matchups. It will take place after the Group C game between Slovenia (2-0) and Spain (2-0) scheduled to tip off at 4:20 AM EST on Sunday.
After a 83-76 loss to France, Team USA has bounced back in a major way, scoring a combined 239 points in their last two games against Iran and the Czech Republic while also keeping their hopes alive of taking home the gold medal.
Joel Pavón
Follow @Joe1_CSP