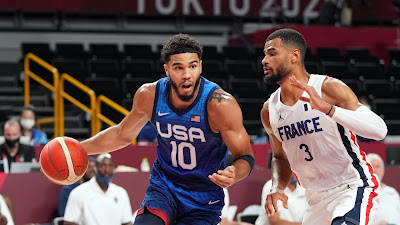 Team USA opened their quest for a gold medal on a sour note, following a 83-76 loss to France in Group A play Sunday at the Saitama Super Arena in Saitama, Japan.
After being down six heading to the fourth quarter, the U.S. took a 74-67 advantage with 3:41 left before NBA veterans Nicolas Batum, Evan Fournier and Rudy Gobert inspired a 16-2 run to end the final frame, giving France the win.

"We let one get away," Damian Lillard said in his postgame presser after scoring 11 points. "There's a lot of things we could have done better, including making shots."

Jrue Holiday, fresh off of helping the Milwaukee Bucks win an NBA title, led Team USA with 18 points -- 12 of them which came in the final frame. Bam Adebayo had a double-double of 12 points, 10 rebounds, while Kevin Durant added 10 points after being in foul trouble for most of the night.
Jayson Tatum finished with nine points on 3-of-9 shooting (1-of-5 from 3) and 2-of-2 from the free throw line in 23 of his first Olympics minutes off the bench.
Meanwhile, Celtics guard and soon to be unrestricted free agent Fournier had a game-high 28 points on 11-of-22 from the field. The reigning NBA Defensive Player of the Year in Gobert went for 14 points, nine rebounds and former Spurs guard Nando de Colo chipped in 13 points and five assists to help seventh ranked France hand the U.S. their first loss during Olympics since 2004.

"The French team played very consistent basketball on both ends of court and did a great job," U.S. coach Gregg Popovich said in postgame press conference. "That's our goal going forward, to be more consistent."

"We have to be more consistent," Popovich said. "We had two nine-point leads and one 10-point lead, and then an eight-point lead at the end of the game, and we gave all of those up because of lack of consistent defense, too many errors, and on offense dry possessions where we didn’t move and took ill-advised shots."

"The next one is the most important one," Lillard said. "We lost this one tonight. We've got to get the next one."

The Americans will look to get back on track in the Tokyo Olympics when they face Iran on Wednesday, as tip-off is set for 12:40 AM EST.
Joel Pavón
Follow @Joe1_CSP