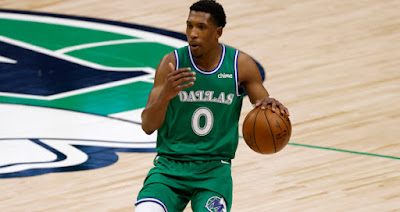 Hours after dealing Tristan Thompson in a three-team trade for Kris Dunn, president of basketball operations Brad Stevens pulled off another move Friday night.
According to Shams Charania of The Athletic, who first reported that the Celtics were acquiring the Dallas Mavericks' veteran Josh Richardson.

The Dallas Mavericks are finalizing trading G/F Josh Richardson to the Boston Celtics, sources tell @TheAthletic @Stadium. Richardson is exercising his $11.6 million player option for the 2021-22 season for the deal.


With the 6-foot-5 guard having a player option worth $11.6 million for the upcoming season, it seemed Richardson's salary would easily fit into the remainder of the Gordon Hayward traded player exception, just days before the official start of the new 2021-22 campaign.
However, per an updated Charania report early Saturday afternoon, more details were revealed that the Mavericks would receive recently acquired young big man prospect Moses Brown in return for absorbing Richardson's $10.8 million salary into Hayward's TPE.

While both teams were going back and forth on what the Celtics would send, it appears the Mavs met in the middle on taking in return the least amount of salary in Brown -- who was set to play on the C's Summer League roster. Boston's frontcourt becomes a little thin again following the Thompson trade, leaving Al Horford, Robert Williams, Bruno Fernando, and Grant Williams for depth.
In the meantime, the Celtics have made the trade official and now there's somewhat of a question mark that still remains when it comes to possibly re-signing free agent guard Evan Fournier, who was also acquired with some of the TPE from last year's Hayward sign-and-trade to the Charlotte Hornets.
According to John Hollinger of The Athletic, the Celtics have a "Plan B" in case negotiations with Fournier's camp goes beyond the $14-16 million per year range. But as Mark Murphy of The Boston Hearld reports, both parties are "close to stalling" while Fournier is seeking a four-year, $80 million contract.
Meanwhile, Richardson has had a tough time finding a stable home with stops in Philly and Dallas the last two years, but could be a perfect fit into what the Celtics are looking like they're building defensively on this ever changing roster. The veteran defensive-minded guard averaged 12.1 points on 42.7% shooting in 54 games this past season and has a career clip of 35.8% made 3-point attempts.
Stay tuned for what ever "Trader Brad" may have in store, especially when free agency begins on August 2.
Joel Pavón
Follow @Joe1_CSP