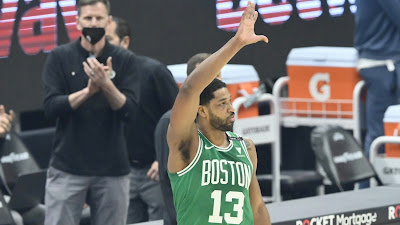 The whirlwind of swaps continued well after the NBA Draft ended, which saw Russell Westbrook get traded to the Los Angeles Lakers just hours prior, essentially ending the Brad Beal to Boston rumors.
According to Adrian Wojnarowski of ESPN, who broke the blockbuster deal between L.A. and the Washington Wizards, he reported on another trade that involves the Celtics, Hawks and Kings.
Per Woj, the Celtics have agreed to trade veteran big man Tristan Thompson to the Sacramento Kings, while Delon Wright will head to the Atlanta Hawks and Kris Dunn is heading to Boston in a three team deal.

The initial report saw Thompson joining the Hawks for Dunn, but the trade expanded to include a third team. The Celtics are also receiving Bruno Fernando and a 2023 second-round pick from Atlanta.
Playing most of last season in a two-center lineup before Daniel Theis was moved at the trade deadline, Thompson averaged 7.6 points on 51.6% shooting and 8.1 rebounds in 54 games for the Celtics. But with the arrival of  Al Horford and Moses Brown via the Kemba Walker trade over a month ago, plus the emergence of Robert Williams, it didn't seem like there were plenty of minutes to go around for all four big men.
Dunn brings toughness and defense to the Celtics' backcourt depth chart, but hasn't been able to stay healthy, playing only four games last season with the Hawks this past season following an ankle injury. He has career averages of 8.2 points (42% shooting), 3.3 rebounds and 4.1 assists per contest.
Fernando is a 6-foot-9 center, who put up 3.3 points (49.8% shooting) and 3.1 rebounds for Atlanta. It's unknown if he will stick around on the roster or not.
Brian Robb of MassLive, reports that the Celtics fit Dunn into the $5 million trade exception created when they sent Enes Kanter to Portland, which was set to expire this weekend. Stevens created a $9.2 million trade exception by moving Thompson as well.
However, Adam Himmelsbach of the Boston Globe is reporting that Dunn potentially could be on the move again, as the Celtics continue to create some more financial flexibility in re-shaping the roster this offseason.
Joel Pavón
Follow @Joe1_CSP