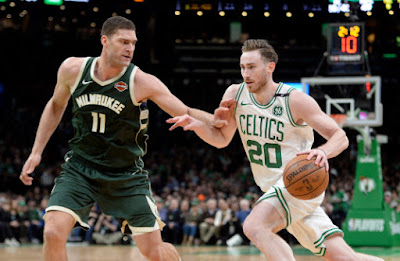 Barring a trade prior to the February, 2020 deadline, what will Gordon Hayward choose to do with his player option for next season? Will he opt in for the $34.2 million or will he opt out and look for the best deal he can get, either with the Celtics or another team?

Despite much personal success, an NBA title has eluded Hayward. Boston's Core-5 of Hayward, Jayson Tatum, Jaylen Brown, Kemba Walker and Marcus Smart are slated to earn roughly $115.9 million next season, and the Celtics are projected to be over the luxury tax threshold. That's not the major issue. Tatum will be in a contract season in 2020-21, and he is due for a major pay raise once his rookie deal is done. Fitting the salaries of Hayward and Tatum into Boston's financial landscape for 2021-22 will require masterful maneuvering by Danny Ainge.


When Gordon Hayward gets his mojo back, you can make that 4 guys who're gonna average 20ppg 😏#Celtics #CUsRise pic.twitter.com/e5LrcnMKvI
— Celtics Nation (@CelticsNationCP) December 26, 2019


Hayward's decision will come down to how the team performs this season and so far it's been good. The Celtics remain in second place in the standings with a 22-7 record, behind only the Bucks in the East. They are on a five-game winning streak, following their victory over the Cavaliers Friday night, despite nagging injuries to Hayward and Smart. The Celtics have to be considered serious contenders for bringing home an 18th championship banner, while their future is as bright as any team in the NBA.

Hayward may be reluctant to leave such a promising tomorrow.

But he will be 30 years old by season's end, and this may be his last opportunity to optimize his next contract. Will he opt for max money for the shorter term or less dollars for an extended contract? Hayward's relationship with coach Brad Stevens goes all the way back to their days at Butler, and that may come into play. Hayward plays a style that fits with virtually any team, but that compatibility does not apply to just any coach. And realizing that the Jay Team (Brown and Tatum) has not peaked yet, and Smart may not have either - we may be looking at a super team next season. That is a clear incentive for Hayward to stay put.

We have not yet seen All-Star Gordon Hayward for any lengthy stretch. Injuries and recovery have limited his participation, performance and mentality. But one thing is for sure, he fits the post-season like a glove. A healthy Hayward is the difference between a disappointing playoff run and ultimate success.

Danny Ainge has survived two heart attacks since joining the front office and he won't remain as the Celtics president of basketball operations forever. He has one championship title since 2003 and wants more - and that could include this season. Ainge will consider Hayward's health, performance and wishes to remain in Boston (or not), and make decisions from there.

There's a huge chance that Hayward remains in Celtics green next season, beyond that is anybody's guess.