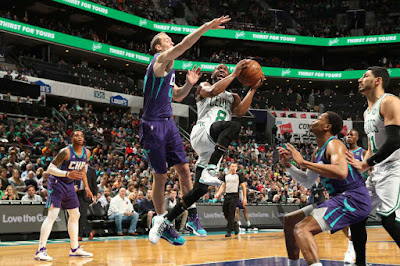 The Celtics put a bow on their 2019 and the decade with a 109-92 win on the road against the Charlotte Hornets Tuesday afternoon.

After coming off a tough loss at home to the Toronto Raptors just a few nights earlier, the Celtics will go into the new year winners of six of their last seven games.

Jayson Tatum led all scorers with a game-high 24 points on 10-of-18 shooting from the floor, including 4-of-7 from behind the arc. Kemba Walker in his second homecoming this season, finished with 22 points and 7 assists. The Celtics point guard spoke about how this time around there was more focus on the game rather than his return to a place he called home for eight years.


"A little less emotional," Walker said. "But it was fun. It's just always fun to see my old friends, my old teammates, the people that work around the building that take care of this place, just a lot of old faces."

Gordon Hayward picked up the slack for the Eastern Conference Player of the Week Jaylen Brown, who was out will an illness, notching a near triple-double of 21 points (9-14 from the field), 10 rebounds and 6 assists.

Enes Kanter recorded his third double-double of 13 points, 14 rebounds and a career-high of six blocked shots in 23 minutes off the bench to help the Celtics complete a 3-0 season sweep against Charlotte.

PJ Washington led the Hornets, who have now lost six straight, with 15 points and Miles Bridges added 14 points, 10 rebounds. Devonte Graham chipped in 11 points and handed out 7 assists, while old friend Terry Rozier finished with 10 points on 4-13 shooting and 5 assists against his former team.

The Hornets jumped to an early 5-0 lead in the first quarter before the Celtics settled in and Tatum hit five straight shots, as they took a 24-18 lead after the first 12 minutes. Hayward scored 10 of his 21 points in the second quarter and Boston grabbed a 50-43 lead into intermission.

Charlotte would get within four early in the final frame and the Celtics once again responded with a 16-6 run to push their lead 89-75 with 9:55 left. The Hornets never got closer than 10 points the rest of the way.

Afterwards, coach Brad Stevens talked about how much Kemba Walker means to the Hornets organization after the franchise's leading scorer drew cheers once again at the Spectrum Center.


"I think people are going to react like that forever -- whether it's here or in Storrs, Stevens said. "Wherever he goes, he's a special guy and he's an awfully good player. And he plays both sides of the ball and he's been really good for us."

The Celtics will celebrate New Year's Eve with a 23-8 record and enjoy a couple of days off before they host the Atlanta Hawks on Friday night at TD Garden, followed by a trip to Chicago on Saturday to face the Bulls.

After getting dominated by the Raptors on the glass, the Celtics out-rebounded the Hornets 62-50. They also shot 45.4 percent from the field, scoring 54 points in the paint and hitting 14 3-pointers on 38 attempts.