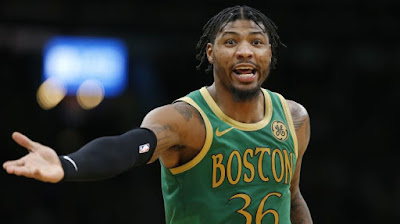 It seems the viral conjunctivitis that has affected both eyes of Marcus Smart and held him out of the last seven straight games has cleared up. But the Celtics guard will have to wait just a little bit longer to make his return after being ruled out for Friday's matchup against the Cleveland Cavaliers at TD Garden.

The team announced Smart as "questionable" following their Christmas Day road win over the Raptors, which was their first victory in Toronto since 2015 -- when a then rookie Smart hit an off the backboard layup before the final buzzer to steal the game.


The last time the Celtics won in Toronto was April 4, 2015, when a rookie Marcus Smart made this hot-potato game-winner. Smart is the only player remaining from that team. pic.twitter.com/w2Hv4p8dfB
— Taylor Snow (@taylorcsnow) December 25, 2019


Smart made the trip up north with his current teammates and spoke about his eye irritation that seemingly spread to both pupils, as the Celtics medical staff began to be concerned to the point that it could affect Smart's long-term vision.


"The way it was going, they were so worried it was affecting my cornea and my vision," Smart told reporters prior to Wednesday's game against Toronto. "It was a little scary." [NBC Sports Boston]

It was thought that symptoms of an allergic reaction in Smart's left eye was the cause of him initially sitting out before what appeared to be the same symptoms that surfaced in his right eye days later. That's when doctors ruled out the possibility of an allergic reaction and diagnosed it as an adenovirus, which can infect the inner eye and even the nervous system.

Smart, who was also fighting off a cold just prior to any diagnosis related to his eyes, was sent home from practice nearly two weeks ago to avoid any of his teammates from also getting sick at the time.


"That just broke my immune system down and opened it up for everything else, and everything else in my body went haywire," Smart said. [NBC Sports Boston]

Smart detailed the pain of both eyes unlike anything he's ever experienced before, on top of having with blurred vision and even being sensitive to any sort of light.


"I couldn't see. I had to wear sunglasses everywhere I went," said Smart. "Even in the dark I was wearing sunglasses. It was that bad." [NBC Sports Boston]

According to Smart it was the mornings that were the worst for him when it came to dealing with just trying to open his eyes.

"Every morning I would wake up, I’d have this sticky discharge coming out of my eyes; sealing my eyes shut. It was gross," said Smart who added, "it got so bad that my eyelids started forming these mucous membranes and they literally had to go in and pry the mucous membranes. It was pretty gross. I was bleeding tears every time they did it, for like a day. They did that for four days straight.

He added, "the first day was the worst. It built up so much it started to scab under my eyelids. It felt like they were putting needles in my eyes. They were using tweezers and get into my eyelids, both the bottom and the top. It was definitely some pain I never want to go through again." [NBC Sports Boston]

While Smart looks to return as early as Saturday when the C's host the same Raptors they just beat a couple of days ago, the longest tenure Celtic sees a bright side when it comes to being out for nearly three weeks and says he's at about 80 percent after using the time off to rest.


"On the good side, I got to heal up … with the injuries I had and let my body do what it does," Smart said. [NBC Sports Boston]

Until then, Smart will continue to get into game shape before he re-joins his Celtics teammates who are 5-2 without him and winners of their last four consecutive games.