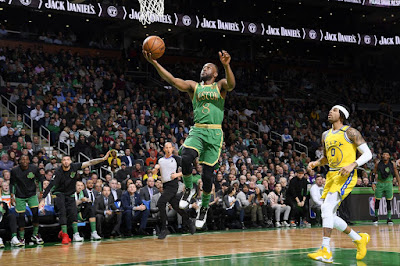 Kemba Walker will not play Saturday when the Celtics host Eastern Conference rivals the Philadelphia 76ers at TD Garden.

According to coach Brad Stevens, Walker's left knee flared up with soreness during the Celtics 119-104 win over the Warriors on Thursday night and will most likely miss at least one more game following the team's matchup with the Sixers.


Though Walker has only missed five games total so far in his first season in Boston, the All-Star guard last sat out for a stretch of three straight at the start of January (3-6) due to left knee soreness. Stevens also noted that Walker's knee is not a "long, long term" issue but the Celtics will keep a close eye on it if needed.

Walker, who was voted as an All-Star starter this year, is averaging 22 points, 5 assists and is shooting 38.8 percent from three-point range.

The Celtics will also be without Enes Kanter, who's been out with a hip-contusion for over a week now, as the big man struggled through the team's practice on Friday. The team will certainly miss Kanter's rebounding against the Sixers' long frontcourt and there is no timeline for his possible return anytime soon.

Kanter is averaging 9.5 points on 60.2 percent shooting from the floor and 8.2 rebounds in 36 games played this season.

Jayson Tatum is still nursing a groin injury, as the Celtics forward returned to the lineup Thursday night on a minutes restriction, after missing the previous three games. Tatum was seen wearing a wrap around his right thigh and riding a stationary bike when he wasn't on the floor against the Warriors. There is no word if Stevens will continue to limit Tatum's minutes when they face the 76ers.

Tatum, who was named an All-Star reserve this week for the first time in his career, is averaging 21.5 points, 6.9 rebounds, 2.9 assists and 1.4 steals in 43 games this season.