Stephen A. Smith says Kyrie Irving is going to sign with the Nets, not the Knicks 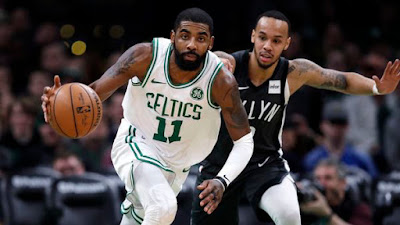 While the NBA Finals are still underway, the free agent offseason rumors have not slowed down, especially those regarding Kyrie Irving.

ESPN's Stephen A. Smith, who has been adamant for weeks now about Irving and Kevin Durant heading to the New York Knicks this summer, has now said that packaged deal has fallen apart.

According to Smith, he's now hearing that those close to Irving say the All-Star point guard will sign with the Brooklyn Nets and not the Knicks.


"Over the last several hours, I have learned that Kyrie Irving has given every indication to the Brooklyn Nets that that is where he wants to go, not the New York Knicks," Smith said Tuesday on ESPN's First Take, adding that he has not spoken to Irving or Durant on the matter. "If indeed it is true — and we don't know that because we still got 30 days — if he decides to go to Brooklyn, [Durant] ain't interested in going to Brooklyn. And as a result, the belief is that KD will either go to New York without him, convince him to come to New York, or settle for somebody like a Kemba Walker. Or KD may decide to stay in Golden State."

Smith last month dismissed the notion that Irving would reunite with LeBron James in Los Angeles, going as far as saying that there was a "95-percent chance" that Irving and Durant were heading to Madison Square Garden.

Even NBA insider and fellow ESPN writer, Jackie MacMullan doesn't believe Irving is taking his talents to LA-LA land. Be that as it may, all these reports and rumors if you want to take them for whatever they are worth, have Irving leaving Boston.

Ian Begley of SNY had an interesting comment that sums up Irving nicely and all that will come into play when it comes to his decision at the end of the month.


"His plans/desires today may not be the same as they are on June 30. With that said, in recent days, people around Irving have described the probability of him returning to Boston as a free agent as low. Those around Irving also said recently that he hasn't ruled out teams -- including the Knicks -- as possible destinations for him this summer, per SNY sources."

For all we know the Celtics could be preparing for life after Irving as you're reading this, meaning all indications of what Smith is reporting to be in fact true. If that's the case and Irving signs in Brooklyn, the phrase "coming full circle" is an obvious one when it pertains to the Celtics and Nets.

If you remember Danny Ainge pulled off what most called a "heist" back on draft night in 2013. The Celtics traded aging stars Paul Pierce and Kevin Garnett to the Nets for several draft picks, one of which was used to acquire Irving two years ago from the Cavaliers.