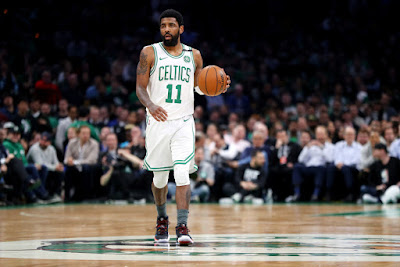 NBA free agency is just around the corner, as Kyrie Irving's future continues to be one of the biggest storylines in the last few weeks. Recent reports suggest that the All-Star point guard is taking his talents to New York, more specifically Brooklyn at the end of the month.

According to Steve Bulpet of the Boston Herald, Irving is "prepared to sign" with the Nets as a free agent.


"According to a source with ties to Roc Nation, the organization expected to become Irving's new representative, the All-Star point guard is prepared to sign with the Brooklyn Nets when he becomes a free agent next month. A separate league source told the Herald that his team (not the Celtics) has received the same information and is operating under the belief that Irving wants to join the Nets.

Word is that the Celtics, meanwhile, had not been given any definitive indication from Irving as of Thursday afternoon."

Earlier in the day, Shams Charania of The Athletic first broke the news of Irving reportedly opting-out of his $21.3 million player option to officially become an unrestricted free agent, which shouldn't have come as a big surprise to the Celtics at all.

Celtics' Kyrie Irving is not opting into his $21.3 million deal for next season and will become a free agent eligible to sign a new contract with Boston or elsewhere, league sources tell @TheAthleticNBA @Stadium.
— Shams Charania (@ShamsCharania) June 12, 2019

Despite a disappointing finish to the 2018-19 season, arguably Irving's best as a pro with averages of 24 points, 7 assists and 5 rebounds in 67 games, it's looking like the Celtics could lose the superstar point guard for nothing come June 30.

With Kevin Durant healing from a torn Achilles injury and recent news of Anthony Davis not wanting to be traded to Boston, it doesn’t seem likely the pairing of Irving and one of his buddies whether it be with the Celtics or elsewhere might come fruition.

Either way, stay tuned for the next Irving rumor, report and or story to come well within the next two weeks.