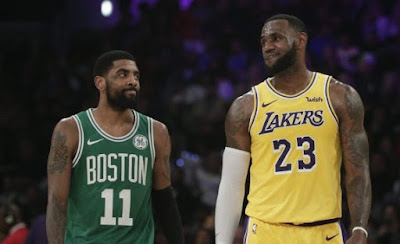 It's officially the beginning of free agency rumors and weeks of speculations for where All-Star Kyrie Irving is taking his talents to, now that the offseason has been well underway for Danny Ainge.

After the Celtics were eliminated in five games by Giannis Antetokounmpo and the Milwaukee Bucks just days ago, the question remains what's next for Irving?

Cue in the latest rumor via ESPN's Brian Windhorst, who has followed LeBron James throughout his NBA career, that Irving is reportedly open and considering the idea of reuniting with James on the Los Angeles Lakers.


"I would've said that this is impossible for many months, but as time passes here and as the possibility exists that Jason Kidd could be hired as the Lakers coach, I think the possibility of Kyrie and LeBron reuniting – that door, which was deadbolted, has been un-deadbolted and has now been cracked open," said Windhorst on ESPN radio. "It might even be opening more by the day. And I say that just because I think it’s on Kyrie's radar, it's on Kyrie's board. He has had discussions with people about playing for the Lakers."

According to ESPN's Adrian Wojanarowski, on Saturday Frank Vogel agreed to become the Lakers next head coach with Jason Kidd also joining his staff as an assistant.


It's safe to assume Irving will be considering all options, since he can opt out of his current deal (player option worth $21.3 million) and become an unrestricted free agent. Two other destination rumors include the New York Knicks -- along with friend who can also opt out this offseason, Kevin Durant -- and the Brooklyn Nets.

Irving possibly ending up alongside James is an interesting concept after they won a championship together in Cleveland (2016) and split up a year later. After rumors that James would leave the Cavaliers, Irving demanded a trade that sent him to Boston. Both superstars were heavily criticized  for not leading their respective teams throughout a hugely disappointing season.

While the Celtics (49-33) made it to the second round of the playoffs and beat the Bucks in a dominating Game 1 win, they would lose the next four to Milwaukee by an average of just over 16 points per-game and Irving would shoot horribly for the rest of the series at 30 percent.

James, who missed 20 games with a groin injury, led the Lakers to a 37-win season and the team missed the postseason for the sixth straight year.

It was only this past January following a win over the Toronto Raptors that Irving admitted to calling James to apologize for being that young player that had a hard time adjusting to not being the team's only leader following James' arrival from Miami.


"I had to call and tell him, I apologized for being that young player that wanted everything at his fingertips," Irving said. "I've been the young guy, being a 22-year-old kid and I wanted everything. I want everything right now. Coming off an All-Star, starting, and this heck of a presence coming back and now I have to adjust my game to this guy."

One thing is clear, the Lakers and James could use the help, plus they've won together before so the move would make sense for both parties. Obviously, James would welcome the reunion, especially since the Lakers have struck out on landing Paul George, Kawhi Leonard and Anthony Davis since James' arrival last July.

Of course, the Celtics remain Irving's best option money and roster wise, but nothing would make Irving more hated in Boston -- despite the ending to a disappointing 2018-19 campaign -- than a move to the rival Lakers.

Then again this is just a rumor, but one that is not totally out of the question. We shall stay tuned for the next rumor, plus the one after that and so forth, as they are only six weeks left until Irving is asked about his future come July 1.