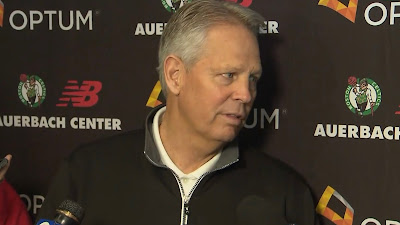 Danny Ainge is back at work, as this offseason is set to be a busy one for the Celtics president of basketball operation.

On Wednesday, Ainge met with the media for the first time since suffering a mild heart attack last month and addressed various topics including his health, any role changes, the NBA Draft and of course Kyrie Irving's pending free agency.

Ainge confirmed his GM title would remain the same, while also poking fun at his new diet and that he's been in great spirits since his health scare.


"I feel good. I feel great. It's an exciting time of year," said Ainge with a smile at the Auerbach Center. "I'm eating more plants — and not the kind of plants in [Bill] Walton's garden."

Ainge was very candid throughout the presser, especially as the focus turned to the elephant in the room when it came to any updates regarding Irving.


"I don't know. There's not much I can say about that, honestly," Ainge said. "There's ongoing conversations. We'll have to wait and see what happens."

Despite the latest rumors of the All-Star point guard planing to sign with the Brooklyn Nets, Ainge says he has not received any indication from Irving's camp that he doesn't want to return to Boston.


"He can do what he wants. It's his choice to do what he wants," Ainge said of Irving's pending decision. "But sure I'd like to have answers to all your questions now, that would be nice. I could relax even more. It's a busy time of year. There's a lot of unanswered questions with free agency and draft and all the players on our roster."

While the future of the Celtics rests on Irving re-signing or taking his talents elsewhere, Ainge did defend the superstar and the criticism he received following the team's disappointing 4-1 second round playoff loss to the Milwaukee Bucks.


"It's unfortunate that one person gets credit or blame for team's failures," said Ainge. "I mean, we have a lot of reasons why the team failed this year and Kyrie deserves his share of the blame, but not anymore than anybody else. There's a lot of guys that didn't handle things the right way and make the sacrifices that needed to be done for the benefit of the team.

"I think they're all going to learn from it, including Kyrie. He's still a young player. I think Kyrie's going to come back even better next year."

There were also lessons that even Ainge admitted he valued when reflecting on the ups and downs of the 2018-19 Celtics season.


"I learned some things from this year," explained Ainge. "I think that it was a unique situation where we overachieved to such an extent the year before with young players. There were so many expectations, not just their own expectations, but expectations from everybody."

Ainge would not comment on potential trades or rumors, including any involving Anthony Davis, who the New Orleans Pelicans are reportedly welcoming offers for when it comes to moving their superstar. Even if Irving walks at the end of the month, the Celtics president of basketball operations says he still would have made the trade that brought the All-Star guard to Boston two years ago.


"There's always risk in making deals. We're not afraid of risk. We made a risk by trading for Kyrie and no matter what happens with Kyrie, I’ll never regret that. Just move on to the next deal."