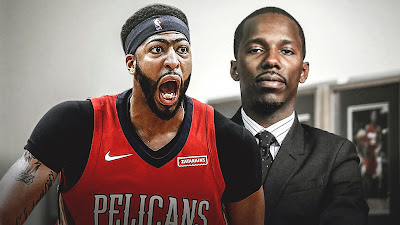 Anthony Davis' agent Rich Paul is adamant that it would be in the Celtics' best interest to not trade for his client this summer.

The high-profile agent told Sports Illustrated earlier this month that Davis will not commit to Boston long-term, and that if the Celtics were to trade for the All-Star big man, it would be a one-year rental before Davis will test free agency waters in 2020.


"He has a year (left on his contract), he has to play," Paul told SI's S.L. Price. "But after that, I can't say it no bigger: WE ARE GOING INTO FREE AGENCY. 2020: ANTHONY DAVIS WILL BE IN FREE AGENCY." [Sports Illustrated]

While the Celtics have been linked with Davis and the Pelicans since the day Davis requested a trade in the regular season, Paul has turned down the thought of his client potentially staying in Boston after next season time and time again. He doubled down on that in his interview with SI.


"They can trade for him but it'll be for one year," Paul said. "I mean: If the Celtics traded for Anthony Davis, we would go there and we would abide by our contractual [obligations] and we would go into free agency in 2020. I've stated that to them. But in the event that he decides to walk away and you give away assets? Don't blame Rich Paul."

It's no secret that the Celtics aren't on the top of Daivs and Paul's list of potential suitors, which makes one wonder if this is Paul's way of scaring off Ainge so that the Pelicans will do business elsewhere. Either way, Paul's interview with SI may not make a difference.

Paul's previous warning didn't scare the Celtics away before, so this probably isn't going to prevent Danny Ainge from reportedly pursuing Davis. It does, however, remind Boston just how risky it would be to trade away young players (Jayson Tatum, Jaylen Brown) and assets, just to see Davis walk one year later.