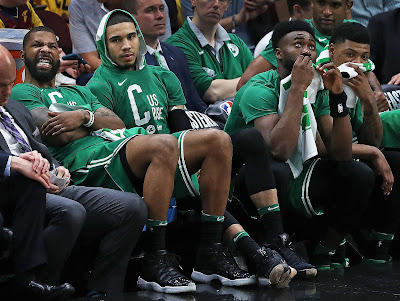 It's only been a month, despite it feeling longer, since the 2018-19 Celtics season came to an abrupt end in the second round of the NBA playoffs.

The short-handed Golden State Warriors stayed alive to see another day after a Game 5 win against the Toronto Raptors, who are still one win away from an NBA title. Those on the current Celtics roster and who have followed this team closely can't help but wonder "what if" Boston represented the Eastern Conferance instead of Drake and the "6?"

You can count Jayson Tatum as one of those still pondering that question, as the Celtics wing spoke about his team's frustrations, among other topics on the latest episode of CLNS Media's Good N' Plenty Podcast with insider Jeff Goodman.


"That's kind of what stings the most," Tatum said of the Celtics short-comings. "Wish we didn't leave things on the table, wish we would've made it work because you don't know how many times you'll get opportunities to be on a team that good. That really, really had a chance."

The former No. 3 overall pick in the 2017 NBA Draft was looking forward to a great sophomore campaign in the NBA, as the Celtics were early favorites to come out of the East, without having to worrying about LeBron James anymore. While Tatum admits his teammates got along and gelled together off the court, it didn't always seem that way on it.


"I don't know what people believe on the outside, but we had a lot of good guys," Tatum told Goodman. "Everybody wanted to win. Everybody wanted to make it work, but I don't know if we knew how to exactly do that. We all got along great, on the plane, off the court, but even watching film, it didn't necessarily look like we were all on the page during the games. And it's not one person's fault. It's not Brad's fault, or Danny's fault, we all played a part. People can blame the GM and the coach, but we still had t go out there and perform and do our job, and like I said, we didn't always do it."

As for Tatum, who has been invited to Team USA's training camp in August, evaluated his own progress this past year despite being involved in trade rumors for Anthony Davis for more than half a season, as he believes there's still more work to be done and he's not yet satisfied.


"I didn't backtrack, I’m still improving in all my numbers, just not as fast as I wanted to," Tatum said. "That's why I'm excited for this offseason and for next season. Hopefully I'm still on the team. We'll see what happens."

Even though Tatum was criticized by many at the beginning of the season for his slow start and blaming his summer workouts with former Celtics rival Kobe Bryant, the 21-year-old says he will continue to connect with the Laker icon whenever he gets the chance.


"Kobe's always told me 'If I ever needed something, advice – he's always just one phone call away,'"said Tatum. "Any time I go to [Los Angeles] I always try to reach out."


You can enjoy the full podcast episode with Tatum below: