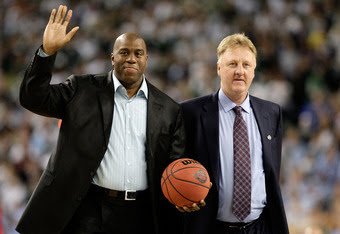 When the Celtics and Pacers matched up in the first round of the 2019 NBA Playoffs, we had a chance to see Larry Bird back at TD Garden, where he received a standing ovation.

Since then, we haven't seen or heard from Bird but that's not going to last very long. The NBA announced that Larry Bird will be a co-recipient of the 2019 NBA Lifetime Achievement Award at the league's annual award show, along with long-time rival and good friend, Magic Johnson.

Bird and Johnson have a combined: eight NBA titles, six MVP awards, five NBA Finals MVP honors and have played for 24 All-Star teams. Bird and Magic's rivalry started in the 1980 NCAA championship game, which is still recognized as the most watched college basketball game of all-time, before it carried over into the pros.

The NBA rivalry between the two created one of the greatest tenures and runs in NBA history. The NBA Lifetime Achievement Award is awarded to a player who has shown great efforts and success both on and off the court.

The NBA Awards will air live on June 24 on TNT.