Why Grant Williams fits Celtics' plans of reshaping its identity 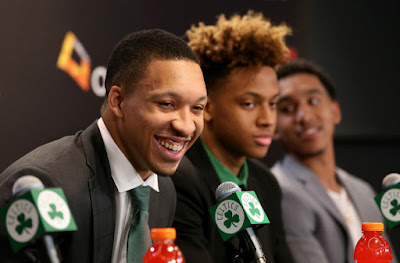 At 6-foot-7 and 236 lbs, Williams could have been overlooked due to this teammate Admiral Schofield, who was projected to be a first-round pick. This was a blessing in disguise for the Celtics, a team in the market for a player who is the reigning 2-time SEC Players of the Year.

Williams is a player who due to his size and athletic capabilities, can play all three big positions in the NBA. He's also someone Celtics president of basketball operations Danny Ainge and head coach Brad Stevens believe will contribute on and off the court, due to his infectious personality and hard work ethic.

He's the kind of guy the Celtics were excited to draft as part of their transition phase in not only retooling the roster but its identity.


"I think it just makes life more enjoyable when everybody is humble, hard-working and will play any role they have to to help the team succeed," Ainge said. "You do have to have a certain amount of talent to win in our league, as we all know but good people makes coming to work more fun."

Williams finished the 2018-19 season averaging 18.8 points and 7.5 rebounds while shooting 56.4 percent from the floor. He became the first player to win back-to-back SEC Player of the Year honors since Corliss Williamson did it in 1995.

Williams dominated the paint -- where he can charge through defenders with his old school approach. His fancy footwork to accompany his high shot release that will leave defenders dazed as he drops one in over their heads.

After Williams was formally introduced to the Celtics media on Monday alongside fellow first-round pick Romeo Langford and second-rounders Carsen Edwards and Tremont Waters, he spent less time talking about his personality on the court to discuss who he is off the court.


"I'm still probably a pretty goofy guy," Williams said. "I'm pretty nerdy, still, on the court because I don't talk trash. I'm a guy that loves to compete. I love winning, I love adding to winning. For me, it's always been about finding a way to do that any way possible."