Report: Celtics refused to include Jayson Tatum in any potential Anthony Davis trade 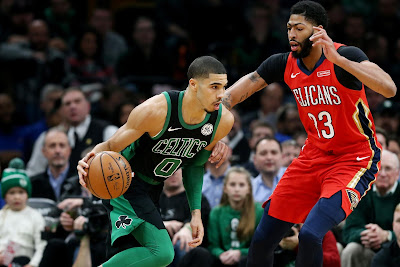 The Celtics are officially out of the Anthony Davis sweepstakes following the Lakers and Pelicans agreeing to swap the All-Star for Lonzo Ball, Brandon Ingram, Josh Hart and three first round draft picks, including the fourth overall pick in the 2019 NBA Draft.

ESPN's Adrian Wojanarowki dropped his first "Woj Bomb" of the offseason as he broke the trade late Saturday afternoon.


The Pelicans have agreed to a deal to trade Anthony Davis to the Lakers for Lonzo Ball, Brandon Ingram, Josh Hart, and three first-round picks – including the No. 4 overall in 2019 Draft, league sources tell ESPN.
— Adrian Wojnarowski (@wojespn) June 15, 2019


Though the Celtics were very much considered as major players to acquire Davis, especially following a report just 24 hours earlier that Danny Ainge could possibly get pending free agent Kyrie Irving to most likely re-sign in Boston if he pulled off a trade for Davis.

However, despite Ainge reportedly looking to strike a deal for Davis even if Irving were to walk in free agency, the Celtics president basketball of operations refused to include Jayson Tatum in negotiations with New Orleans, according to NBA insider Marc Stein, who reported the news just moments after the trade between the Lakers and Pelicans was announced.


Last week, Davis' agent Rich Paul warned the Celtics not to trade for his client, stating that he would not re-sign long-term and leave in the summer of 2020. Plus, the uncertainty of Irving's pending decision to stay, head to the Brooklyn Nets or elsewhere, Ainge ultimately decided that sending Tatum, who averaged 15.7 points and 6 rebounds this past season, and other key assets to New Orleans was to much of a big risk to take.

Essentially, for all intent and purposes, assuming Irving leaves in a few weeks and with Davis now heading to Los Angeles, the Celtics may have just entrusted a 21-year old Tatum to become the new face of their franchise.