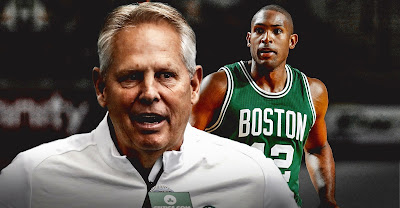 Anthony Davis is heading to the Lakers, while the Celtics have shifted their priorities to retaining Al Horford.

Horford has a $30.1 million player option that he must make a decision on to pick up by Tuesday, June 18 or become an unrestricted free agent.

If Horford and the Celtics come to some sort of an agreement, the deadline can be pushed back to June 29 at the latest. As of Saturday, Adam Himmelsbach of the Boston Globe reported that the 33-year old Horford remained undecided on opting-in to the final year of his deal.


I was told that Al Horford hasn't made a final decision yet about his $30.1 million player option for next season. The deadline is Tuesday, but that can be moved back if both sides agree.
— Adam Himmelsbach (@AdamHimmelsbach) June 16, 2019


According to the Boston Herald's Steve Bulpett, Horford and the Celtics have spoken about a new contract that would consist of more years at a lower salary if the veteran forward/center were to opt-out.


"Horford has until Tuesday to opt in to $30,123,015 for next season, but the sides have been discussing a plan where he comes in at a lower number next season and gets two more years tacked on in a new deal. It's not known whether the way things have played out over the last couple of weeks will have an effect on Horford’s outlook."

While Davis is off the table for Danny Ainge, plus rumors and or reports have Kyrie Irving heading to Brooklyn, Horford might want to consider free agency and a legit shot at a championship, as his window might be closing.

Rockets big man Clint Capela is another name floating around as a potential trade option to boost the Celtics frontcourt, but nothing has materialized as to what pieces would be involved to possibly pull off that deal.

Either way, Horford and of course Irving's decisions will have a big impact on the Celtics in the next week or so.