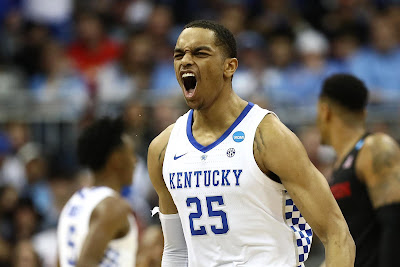 P.J. Washington raised quite a few eyebrows when he returned to Lexington for his sophomore season in lieu of declaring for the NBA Draft. Perhaps, it had more to do with the class ultimately being stacked with centers that carried higher upside than Washington or maybe he believed there's facets to his game that needed to be improved.

During the waning days of his high school career, Washington only visited three schools prior to committing to Kentucky. The University of Nevada and the University of North Carolina were the other two and for someone like Washington -- a seamless fit in how the modern NBA uses versatile stretch forwards/bigs -- he certainly picked the coach who'd constrain him the most.

Despite shooting 42 percent from behind the arc, his lowly 78 attempts leaves one worried if it's all smoke and mirrors. Kentucky coach John Calipari hasn't been very fond on bigs shooting 3-pointers, the notorious case is how he used Karl Anthony-Towns.

However, coach Cal inspires trust amongst his players who aren't the big names you'd see on ESPN. Names like Willie Cauley-Stein and Tyler Ulis enjoyed successful sophomore campaigns and arguably saw their draft stock rose as a result, despite age being the biggest factor in the scouting process.

Up until late March, Washington was positioned on the fringes of the lottery before the rise of Sekou Doumbouya, Jaxson Hayes, Rui Hachimura and Brandon Clarke leaped over him, according to ESPN's latest mock draft projections. Fortunately, the prognosticators at ESPN believe Washington will still be on the board when it's time for the Celtics to select their No. 14 pick.

Comparing Washington's freshman campaign to his sophomore one, the clearest thing that comes to my mind is the growth of his role. The departing forwards on the roster (Kevin Knox, Jared Vanderbilt) helped Washington carve out an increased role on the offensive end of the floor.

His attempts went from 7 to 10.4, usage rate jumped from 20.8 to 25.8 and his offensive rating went from a below-average 110.1 to 119.5. As far as refining his skills on the court, Washington made the best choice for himself in returning to college.

At 6-foot-8, he shot nearly 55 percent from inside the arc and flashed potential to be a serious pick-and-pop threat from deep. Scoring in the 95th percentile (1.391 points per possession) on catch-and-shoot 3-pointers could be a deceiving stat on such a small sample size, however, Washington's stroke and mechanics leaves you with some promise of seeing him flourish into an All-Star down the road.

His high release makes his shot nearly unblockable, his passing is an underrated nugget to his game. The issue being his apparent selfishness and inability to overcome his tunnel vision has hurt him a bit, along with his below-average defense despite his 7-foot-3 wingspan -- his lateral movement and ability to close out on shooters is a weakness on the defensive end of the floor.

NBA comparison is Kelly Olynyk. Washington can survive on the perimeter on both ends of the floor and holds a wide array of moves such as pump fakes, spin and counter moves to get to wherever he wants to on the floor.