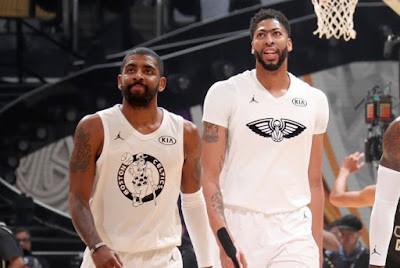 Another day, another Kyrie Irving free agency rumor going viral, but this time could it be that the Celtics are preparing to move on from said All-Star point guard?

According to NBA insider Steve Kyler, those closely around the Celtics believe that Irving is as good as "gone" come the end of the month when he can opt out of his current deal, worth $21.3 million, to become an un-restricted free agent.


In a series of tweets from last week, Kyler believes Danny Ainge and the Celtics are “not operating like a team focused" on re-signing Irving and also pairing him with Pelicans star Anthony Davis.


All I can tell is what's happening behind the scenes... Boston is not operating like a team focused on Irving and Davis... In fact, the things they are exploring run counter to a Davis and Irving future. https://t.co/EXagayBiSO
— Steve Kyler (@stevekylerNBA) May 31, 2019


Furthermore, it may also appear that Ainge is exploring trades to compliment the Celtics young core of Jayson Tatum and Jaylen Brown, if this is in fact the end of the Irving era in Boston.


I can help a little... The Celtics have been actively exploring trades, and draft scenarios for players that would better lineup with a future built around Tatum and Brown... sources close to the team are skeptical that they can get Irving back but remain open to re-signing him. https://t.co/uUxWHyYifM
— Steve Kyler (@stevekylerNBA) May 31, 2019


It should be interesting in the upcoming weeks, as the Celtics are the only team that can offer Irving the most money; in terms of a five-year deal, worth roughly $190 million.

Despite a disappointing end to the 2018-19 campaign at the hands of the Milwaukee Bucks, Irving had arguably his best season as a pro averaging 23.8 points, 7 assists and 5 rebounds a game.

For the past few weeks, Irving has been linked to the Lakers, Knicks and Nets, as it was also reported that the superstar guard recently purchased a home in South Orange, New Jersey.


🎙️@RicBucher: "It's between the Lakers & Nets for Kyrie Irving...

––Kobe has been recruiting Kyrie to the Lakers, but I expect Kyrie to go to 𝗕𝗥𝗢𝗢𝗞𝗟𝗬𝗡. He just bought a place in South Orange, NJ." 👁️👁️