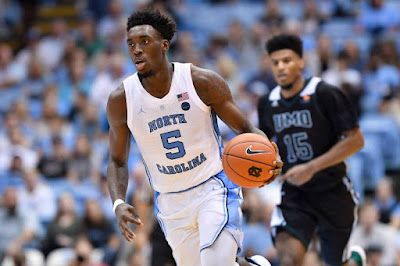 Prior to playing a second for North Carolina, 6-foot-7 forward Nassir Little was projected to be a lock as a lottery pick.

His strong body and long arms make him the prototypical 3-and-D wing for the modern NBA. Scouts knew beforehand how challenged Little is shooting the ball, his calling card on offense is transition scoring due to his body frame, which made him nearly unstoppable.

Ranking in the 71st percentile, scoring 1.143 points per possession, Little can use his body to compensate for his lack of shooting until a certain point -- which is why he played below 20 minutes for Roy Williams. His offensive woes are hard to paint as the fault of the talent around him.

Little finished his lone season at North Carolina averaging 9.8 points, 4.6 rebounds while shooting 47.8 percent from the floor, including a woeful 26.9 percent from behind the arc.

Still, despite the rumored tension between him and his head coach, the five-star recruit never earned the label as "uncoachable." He's a hard worker who was never afraid to ask questions, and coach Williams said "that's going to be his saving grace."

Little is a mixed bag with all of the physical tools for a long and fruitful NBA career. A master of none, adequate in only one facet of his game, he can do a pretty slick Jeff Green impression and disappear on any given night while making you think he's forcing the issue too much.

Maybe Little made a mistake picking UNC, Duke was also on his shortlist of possible college destinations. If the Celtics draft Little, it'll take a long-term commitment to develop him into someone who better fits the role of a 3-and-D guy.

They've taken on taller tasks in the past, in terms of turning non-shooters into above-average ones. Little is eager to turn the page on his poor college career, even if it means starting his professional career in the G-League.