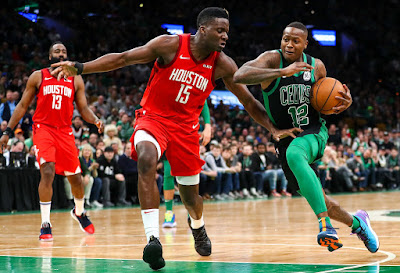 Danny Ainge and the Celtics continue to wait and see on what All-Star Kyrie Irving will decide. The pending free agent is expected to opt out of his current contract and based on the latest rumor, he wants to sign with the Brooklyn Nets.

While all signs point to Irving leaving Boston, the Celtics will look to add to their young core moving forward, especially if a deal for Anthony Davis falls through.

According to Basketball Insider Steve Kyler, the Celtics have been "engaged pretty seriously" in trade talks for Houston Rockets big man Clint Capela.

The Celtics from what I have heard engaged pretty seriously on Clint Capella... have had some level of talks with Terry Rozier on a new deal. Everything is very fluid at this stage in the draft/trade process. It's finding out what you can do. https://t.co/7kHmEWP6X1
— Steve Kyler (@stevekylerNBA) June 9, 2019


Kyler also noted that despite it being a rumor, the move for the 25-year-old Capela would make sense for the Celtics, who are preparing for life after Irving, in case he goes.

Capela has been known for his great rebounding and for being a rim protector, as he averaged 16.6 points, 12.7 rebounds and 1.5 blocks this past season for the Rockets -- his first of a 5-year, $90 million deal.

Houston general manager Daryl Morey has made his entire roster available with hopes of re-molding a Rockets team that has failed to get over the hump in the West.

Al Horford, who can opt into $30.1 million of the final year of his current deal, could be the centerpiece in a trade between the Celtics and Rockets. Or Horford could opt out and Boston and Houston could find a third team in a sign-and-trade scenario.

Either way, acquiring Capela is no guarantee and it depends on how the offseason for both the Celtics and the Rockets unfolds.