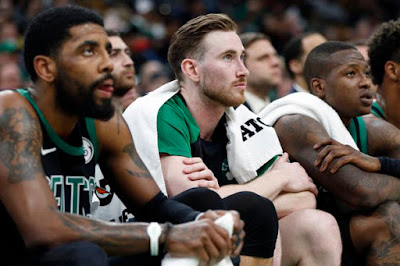 When it came to the 2018-19 Celtics chemistry on the court, there is no doubt a divide could be traced back to the locker room. While most have their opinion on what they think was the main culprit for the roster never getting on the same page, here's some more food for thought on the subject matter.

ESPN's Jackie MacMullan is the latest to offer her two cents on why she believed the Celtics couldn't seem to get it together throughout the regular season and also eventually in the playoffs and she isn't referring to pending free agent Kyrie Irving's leadership but instead Gordon Hayward's return.


"You hate to pick on Gordon Hayward because he was coming back from injury and he was doing the best he could, but I really think that's where it started," she said on NBC Sports Boston Tuesday night. "They were force feeding him on his teammates, Brad [Stevens] knew Gordon well, he wanted to get his confidence back.

"I would contend that Brad Stevens would have done that for any player on that roster that had a catastrophic injury, he would want to fill him with that same confidence, but that's not what happened," MacMullan continued. "He gave the benefit of the doubt over and over to a player that wasn’t ready, to a guy who had history with him, and it rankled that locker room, and it bothered that locker room."

While the Celtics are preparing to watch Irving and now Al Horford walk in free agency, on top of Danny Ainge also striking out on a potential Anthony Davis trade over the weekend, it appears that the youth movement of Jayson Tatum, Jaylen Brown and possibly Terry Rozier are in line to become the face of a rebuild.

The same aforementioned trio that felt like their minutes were cut by coach Brad Stevens this past season to accommodate his former Butler standout Hayward, despite all three leading the Celtics to Game 7 of the Eastern Conference Finals just a year ago, without the former Jazz All-Star forward or even Irving.


"I think [the other players] drew conclusions that probably weren't even fair or accurate, but it doesn't matter," MacMullan explained. "If you feel that way, then it's real."

Ainge and the Celtics are left with un-answered questions in the wake of a head scratching season, one that had so much promise, as free agency is less than two weeks away on June 30.