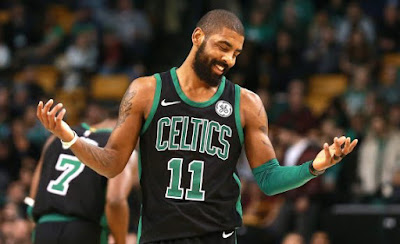 While it's another day closer to free agency, there's also another story about how bad of a teammate Kyrie Irving was during the 2018-19 campaign.

NBC Sports NBA insider Tom Haberstroh spoke about the pending Celtics free agent on his podcast, and how "the whole soul of the team was ripped out in two weeks," as Irving and now Al Horford are preparing to leave come June 30.

According to ESPN's Ryen Russillo, Irving's soon to be ex-teammates told him that it got pretty bad throughout the season.


"I think they should've moved on from Kyrie. Because it was THAT bad," Russillo told Haberstroh on the Habershow Podcast. "People around the team, some guys who had never said anything to me, guys are like, 'It's just time.' But you know, you don't want to lose that asset for nothing. So, I think the Celtics were still trying to figure out a way to salvage it. It's not a trade demand, but it's mimicking the same things from like two years ago [when Irving wanted out of Cleveland] where once Kyrie shuts it down, he shuts it down."

This story comes on the heels of Russillo's ESPN colleague Jackie MacMullan speaking out on why she believes Irving is leaving and it boils down to the simple fact that "he didn't like living in Boston," while also not getting along with Brad Stevens and even Danny Ainge.

Russillo took it a step further and talked about Irving never being a fan of LeBron James returning to the Cavaliers in 2014 and even contemplating asking for a trade out of Cleveland following the 2016 title run, suggesting that maybe it isn't Irving's teammates that have issues.


"Do you think you're operating on this level of understanding no one can catch up to you? I'm not knocking you. If you're just seeing the world differently than the rest of us, then who am I to tell you you're wrong? If it's that abrasive with all your teammates all the time, then that's a problem," Russillo said.

Whatever the case may be for the quirky and moody superstar, Irving is making sure he remains in control of his next move whether it be Brooklyn or somewhere else.


"As outdated as it seems in 2019, being part of a team is giving up some things about yourself to make this thing work. I think Kyrie is years from saying, 'Hey what if it's it's me and not everybody else?'